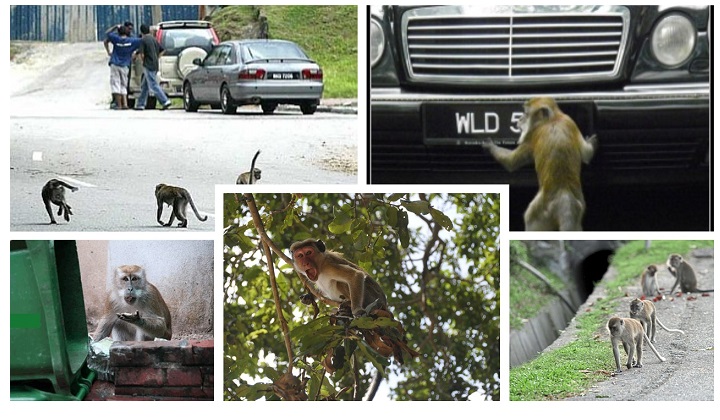 Just a week ago, we were all reminded that you should never EVER mess with the Batu Caves monkeys. An unwitting American internet personality learned THAT the hard way.

But it seems like the monkey business isnâ€™t over yet.

This week, we learn about the gangster monkeys that have been terrorising the residents of Taman Gasing Indah (near Bukit Gasing) in PJ.

Residents of the PJ suburb are apparently living in fear,
trapped in their own homes.

Monkey gangs that have been trawling the neighbourhoods not for protection money, but for food andâ€¦. well, sh*ts & giggles, literally.

The Star reports that the macaques have gone WILD, swinging into homes & going bananas, like:

While the residents have a chimp on their shoulders when talking about the monkeys, most of them blame the rapid development of the area for the increase of monkey gangs in the â€˜hood.

â€œA proper impact study should have been done before clearing the primatesâ€™ natural habitat.
There were always monkeys in the hills but they never came to our houses as is the case now.â€

Lee KL, Resident of Taman Gasing Indah via The Star.

Their theory is echoed by Derek Fernandez, Petaling Jaya councillor who stated that the decimation of the Bukit Gasing green lung from unsustainable development was to blame.

â€œThis has forced the monkeys to enter nearby housing areas for food in order to survive.

I hope the Government has the courage to do the right thing instead of perpetuating a policy of unsustainable development at the expense of the environment and the people.â€

Voices of concern have been pouring in over the last decade
as developers inch their way deeper and deeper into what is probably the only remaining
green lung in Lembah Pantai.

Back in 2008, Bukit Gasing residents actually filed for a judicial review to compel the Kuala Lumpur City Hall (DBKL) to hold a public hearing over its decision to grant a development order to Gasing Meridian for a hillside project in 2007. Unfortunately, they lost the case.

In 2013, The Edge reported that one of the condominium projects constructed on the Kuala Lumpur side of Bukit Gasing breached the buffer zone of the green lung.

Currently, the residents of Taman Gasing Indah have been working
with authorities such as Perhilitan (Wildlife and National Parks Department) to
set up monkey traps, but the monkeys have been pretty good at avoiding them.

For now, all they can do is fortify their homes against the rampaging monkey gangs and hope that the authorities will do something about the monkey on their backs.