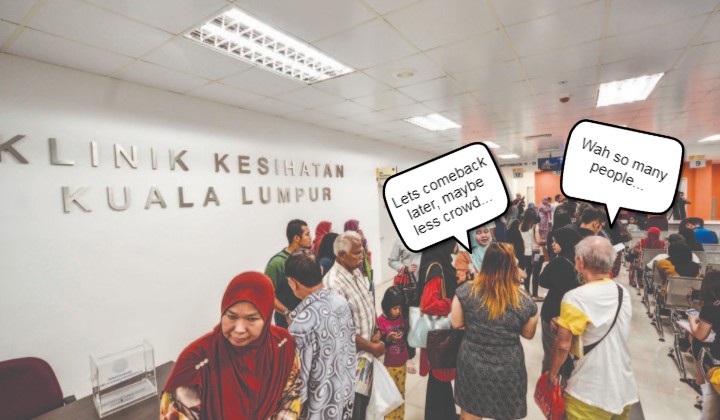 Let’s face it, no one likes to wait. Especially when you’re in need of medical attention.

And if you’re accustomed to visiting government clinics, then you’d know that ever so often the boredom of a long queue can either make you feel sicker or magically cure you…

Well, doctors at the Malaysian Medical Association (MMA) might have an antidote to help alleviate the time patients spend in the waiting room by introducing a two-shift work system for the medical staff at government clinics.

MMA president Dr. N Ganabaskaran said that the idea would remedy the snarl-ups occurring at government clinics as well as the emergency and trauma departments (ETD) of government hospitals.

The good doctor mentioned that part of the reason why government hospitals were suffering from inefficiencies was due to the fact that average patients would often crowd ETDs even though their ailments weren’t really that serious.

Assumingly these patients seek medical attention at ETDs to avoid the queue happening at the clinic.

Most government clinics in the country operate for around 15 hours per day, and only 7% of them are open to patients on a 24-hour basis.

Having a two-shift system, the doctor said, would greatly improve the conditions in both government clinics and hospitals.

Besides providing less wait time for patients, the MMA also sees the two-shift system as beneficial for the government’s overworked medical staff.

The MMA also figured that it would be a better idea to invest in technologies to replace the pre-historic equipment in government medical facilities, rather than adding on staff to medical centers that lack the infrastructure to handle them.

The doctor also noted that the country’s healthcare infrastructure would also gain from having an integrated record sharing system, between private and government medical centres.

24-hour service, fewer crowds, doctors who aren’t burned out using state of the art equipment and as an added plus, already has your medical history at their fingertips.

Makes for some good healthcare, right?

Taxing Vapes Is Better Than Leaving It Unregulated