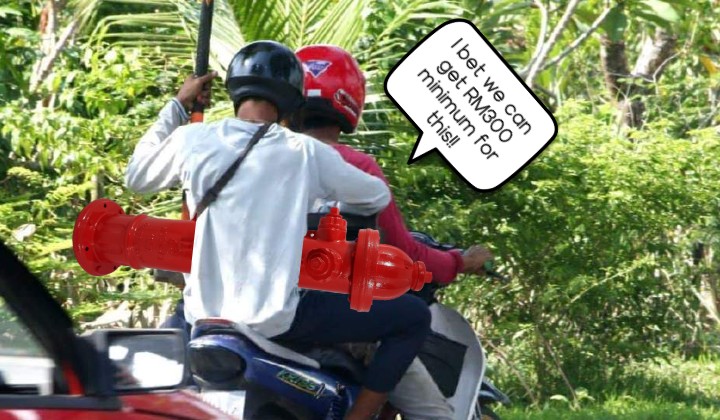 Two brothers were arrested for looting a fire hydrant in Kuching, Sarawak yesterday.

The two men aged 18 and 24-years old respectfully were detained just seven hours after their heist, when footage of them riding around town with a bright red fire hydrant between the two, went viral on social media alerting authorities.

Apparently, the duo had used a sledgehammer in order to attain their bounty which had been sitting idly by a roadside.

The two suspects reportedly had pushed the fire hydrant to a local junkyard for RM25.80

The owner of the said scrapyard was also arrested.

Its believed that the brothers were under the influence of drugs during their great Sarawakian Job as both men confessed to using methamphetamine.

Since January 2019 a total of 4,928 fire hydrants had been damaged or lost due to vandalism in Sarawak, a frightening number considering fire hydrants play an integral role in the safety of the community.

Under the Fire Services Act 1988, vandalism and theft of fire hydrants can be met with serious fines or jail time.

One would even get saman some RM100 just for parking or blocking available hydrants in a given area.

So its best to take good care of our fire hydrants, youâ€™d never know when youâ€™d need emâ€™…