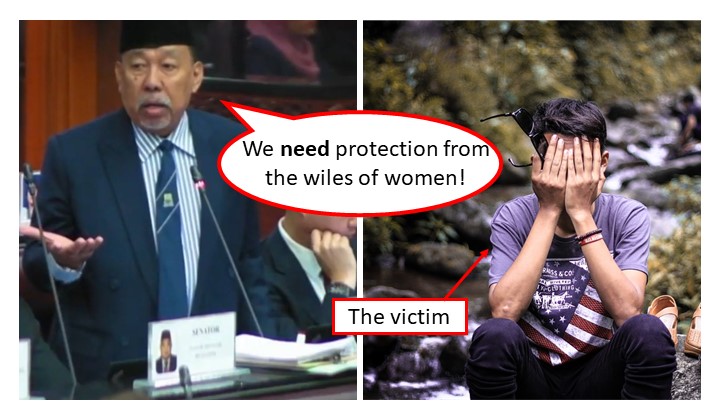 Senator First Admiral (Rtd) Mohamad Imran Abd Hamid has put forth a suggestion to protect men from the wiles of women, particularly because the way women speak and dress can effectively seduce men into committing acts of crime such as incest, rape, pornography, and others.

Mohamad Imran only has the country’s best interests at heart, as he claims that “men, God-willing, are safe, and this country will be peaceful”.

After immediate backlash from almost everyone, Mohamad Imran has apologised, claiming that he did not expect it would be seen as a grave mistake offensive to women and insulting to men.

Above all else, we must commend Mohamad Imran for being honest. It’s not easy to tell the whole country that a senator like him, meant to discuss legislature that would guide Malaysia to a shining future, is just like any regular dude and he too would fall prey to mere scraps of clothing.

He brings up the point of being driven to crime such as rape or incest, firmly implying that men are incapable of rational thought and will-power.

Why stop at legislature? Men like that will be unable to be stopped by law and one accidental slip-up from a women showing (gasp) ankles can ruin a man’s entire career.

We can’t allow this kind of risky measures. Such men with no integrity can’t be held accountable for any of his actions, so we must eliminate all risk to the men entirely.

Instead of a simple legislature policing women’s clothing, we propose an expansion to that proposal.

Firstly, such men are encouraged to not be too friendly with women if you are forced to communicate with them.

It is understandable that work or other unavoidable situations may put you in close proximity with a member of the opposite sex.

To prevent that, you should pre-warn all your friends, co-workers, relatives, and family that you are an at-risk male. You can send a mass email or message to explain your uncontrollable urges and should refuse to meet anyone if there will be a female present.

The female-only coaches were a great idea, but men still had to share the mixed coaches with other women who may be with a man. Even so, they are still women and are seducing everyone with their mannerisms and existence.

As a particularly at-risk male, there should be male-only coaches to keep you safe from the cunning female temptations.

Thirdly, we must give the men adequate protection against the dangers of seeing a bit of elbow. A pair of sturdy eye masks will be helpful in this case and must be worn as long as any member of the opposite sex is within sight.

My advise to men who worry that you will be seduced by the clothes of women wear. Please wear a pair of eye mask whenever you step out your room. So your daughter, aunties, neighbours and all other unknown women will be safe. And hence you will be safe too!

The men can even have words printed on it, to warn women to stay away, such as “Please leave me alone, I may rape you if I see you.”

All Malaysians are entitled to basic safety and respect. We must account for everyone, including the men who may be particularly susceptible to the mere physical presence of the female gender, and protect them all the same.

May you, man or woman or neither, be safe today.

“Another 2 GEs”, Nurul Izzah Thinks That It Will Take A While Before PH Can Reclaim Putrajaya