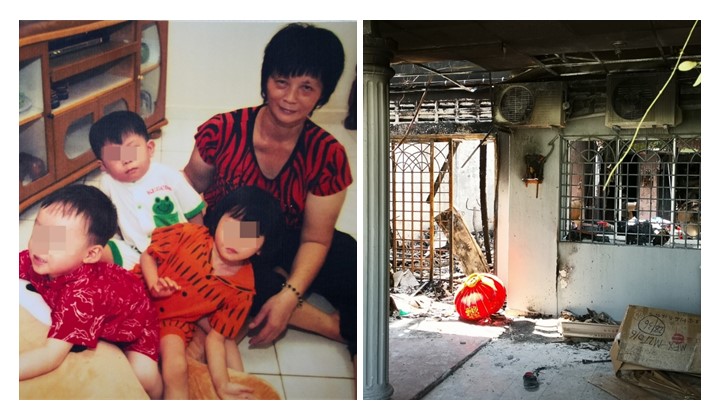 Brave nanny Xu’s main concern were the two babies she helped take care of when her house caught on fire earlier this week.

On July 29th, a fire broke out in Batu Pahat, Johor. Xu had left the house to get breakfast nearby while the two young children slept in the master bedroom.

Upon returning, she found that the front part of the house was already aflame. Xu had wanted to rush back into the house but was stopped by onlookers at the scene.

Although at the time the house was more than 70% aflame, she wet a small towel to cover her head and ran into the burning house regardless to save the two kids in the master bedroom.

Her son followed her in via the back door, which was broken down by neighbours, but electricity to the house was already cut and the house with dark.

It was then that he found his mother Xu sitting on the floor hugging the two children, relatively unharmed save for some light burns, tightly in the smoky dark room.

At that time, Xu was still conscious when her son managed to get her and the children out of the house, but had suffered burns to 80% of her body.

She was hospitalized immediately, but due to the severity of her injuries, passed away at dawn the next day.

According to her son, Xu had been a nanny since 1995 and took the job very seriously.

Being a nanny comes with great responsibility, because other people will only entrust their kids to me if they trust me.

Xu often speaks of her responsibility to other parents, according to her son.

He claims that Xu wanted to retire after this particular batch of kids, one of which is her eldest daughter’s child, and enjoy her golden years.

It is highly unfortunate that tragedy struck. He also claims that perhaps one of her last regrets was that she never got to care for her own grandchildren.

My mother has wanted to hold (her) grandchildren for a long time. (1)

However, his last memory of his mother is a happy one. Xu had been very happy because both his eldest sister and he had bought houses in the nearby residential area and his mother was looking forward to spending more time together.

Just the day before, my mother was happily chatting away with my eldest sister. I never thought this would have been the last time I heard her laugh.

TRP sends our condolences to the affected families.