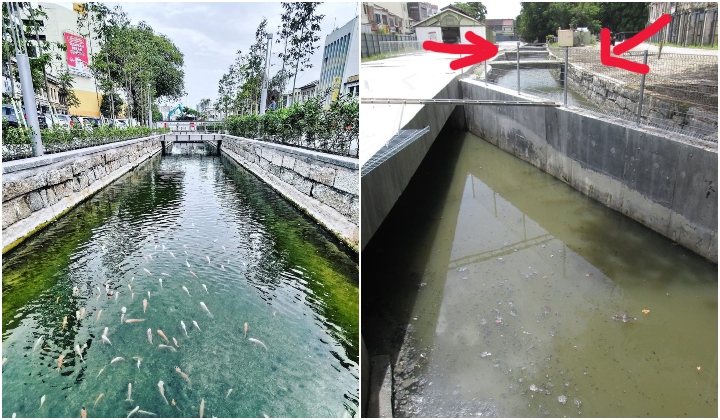 Over the weekend, the Malaysian social media sphere was alight with an unbelievably beautiful image of a river in Penang.

The sparkling turquoise waters teeming with koi-like fishes was even compared to the famously beautiful rivers of Japan!

Alas, the unbelievably beautiful picture turned out to be just thatâ€¦ unbelievable.

Thanks to the amateur sleuths of Malaysian social media, the super clean river was revealed to be aâ€¦.

Facebook user Abdul Kader pointed out that the actual river is diverted and hidden under walkways. He also calls it the â€œvisual representation of sweeping problem under carpetâ€.

More images have also popped up showing an unedited view of
the canal.

Along with the actual water quality.

The â€œriverâ€ in the viral image is actually Prangin Canal, and its new image is part of the Sia Boey Rejuvenation Project which included rehabilitation of the Prangin canal along with conservation of the old Prangin market and restoration of shophouses in the future.

It seems that this particular arrangement has rubbed many people the wrong way as highly critical comments flooded social media.

However, there were also groups who did not completely dismiss the project, hoping that this would encourage Malaysians to appreciate the surroundings and endeavour to keep the cities clean.

Some also clarified that the canal is part of a new storm flood mitigation system.

There is still no word from the state government about the viral issue above, but we do have to commend the quick movements of Malaysians on social media to rectify the edited photo.