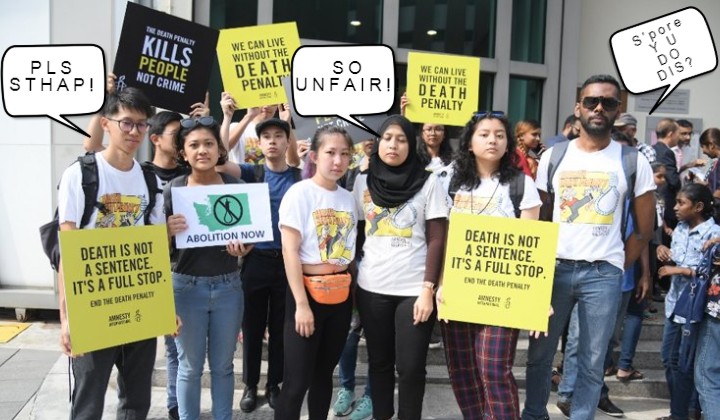 This demand was made during a protest in front of the Singapore embassy in KL yesterday, where the group claims that the island metropolitan had been unfairly treating Malaysians caught under the nationâ€™s Misuse of Drugs Act.

The protest was joined by several NGOs including the Malaysian Bar, Suaram, Amnesty International as well as family members of the Malaysian death row inmates in Singapore.

Protesters questioned why Singapore has been interfering and denying Malaysian inmates access to proper legal aid, representation and from seeing their families, accusing the nation of discriminatory practices.

â€œAustralian lawyers are allowed to meet their clients in Changi prison. I, too, applied to meet my clients but was rejected. Why doesnâ€™t Singapore allow Malaysian lawyers to do so, too?

â€œSingapore canâ€™t pretend it is putting an end to the drug trafficking problem by hanging Malaysian drug mules from a poor background, especially when most of them have been duped into smuggling these things.â€

Singapore is known for their harsh anti-drug policies. Penalties under the nation’s laws range from fines of up to RM30,000 to a maximum of ten years in prison or the more draconian, death penalty.

Currently, there are four Malaysians facing execution out of the 10 convicted of drug-related offences in Singapore.