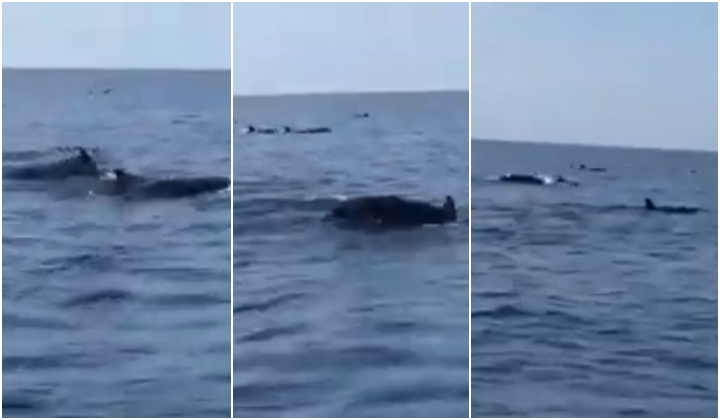 A video recording by fishermen has emerged showing about 10 to 50 pilot whales swimming in Besut waters, about 30 kilometres from shore last Wednesday.

According to Astro Awani, this species of pilot whales have never been spotted in Terengganu waters before. The appearance of this mammal is the first ever reported sighting!

Bestowed with a scientific name of Globicephala macrorhynchus, short-finned pilot whales are considered an endangered species and are on the IUCN Red List of Threatened Species.

In Malaysia, short-finned pilot whales are protected under section 27 of the Fisheries Act 1985.

Why were they here?

Theyâ€™re typically found in warm, tropical and temperate oceans and typically prefer deeper waters where most of their food (squids) live.

This could be the reason why they were spotted in Terengganu waters, as stated by Fisheries Research Institute (FRI)â€™s Marine Mammal Branch chief, Mohd Tamimi Ali Ahmad:

â€œPerhaps because Terengganu’s waters have abundant squids, these pilot whales have made the South China Sea a part of their migration routeâ€

Why are they called pilot whales?

Short-finned pilot whales actually have many names from pothead whale, blackfish and even â€œcheetahs of the deep seaâ€ for their high-speed, sprint-dives to capture prey.

However, the name â€œpilot whaleâ€ comes from an old theory that the pod of whales was â€˜pilotedâ€™ by a single leader. Which turned out to be false but the name stuck Â¯\_(ãƒ„)_/Â¯

Fun fact: Pilot whales are NOT whales, but are large dolphins!

Theyâ€™re the second largest member of the oceanic dolphin family (orcas are the first).

Now that you know a little bit about these bulbous-headed creatures, you can watch the video of them swimming in Terengganu waters below: