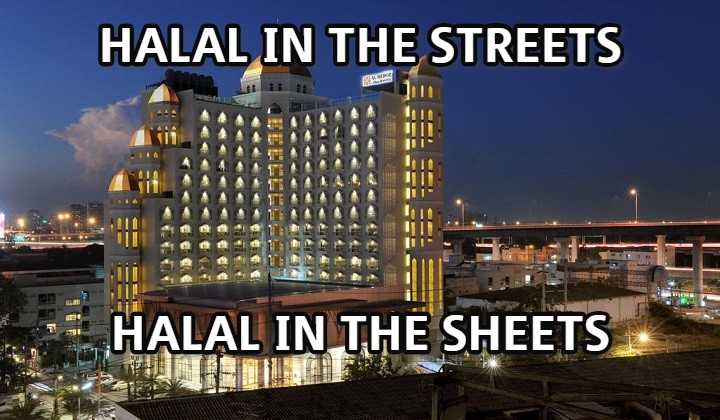 With so much confusion abound about the halal-ness of everything (even bubble tea) , those looking for a good nightsâ€™ sleep can now be free of haram nightmares thanks to the Malaysian government.

The sinless news is brought to you by the Tourism, Arts & Culture Ministry who launched this ‘halal hotel’ initiative which recognises syariah-compliant accommodation for tourists.

According to The Star, Tourism, Arts & Culture Minister, Datuk Mohamaddin Ketapi also states that this is the FIRST time such recognition issued by a government agency!

â€œWe are the first country in the world to have a government-backed initiative. Such standards or accreditation currently out in the market are all released by travel entities.â€

Implemented by the Islamic Tourist Centre (ITC), the accreditation developed with Sirim Berhad is divided into 3 categories according to how well the accommodations meet the 7 Muslim-friendly conditions.

What are the 7 conditions?

Neither the Tourism Ministry nor ITC clarified the 7 conditions on their websites, but we did find a research paper on syariah-compliant hotels by local researchers in the Journal of Tourism, Hospitality and Environment Management.

According to this paper, a syariah-compliant hotel or Islamic hotel is not only limited to serve halal food and drink, but the operation throughout the hotel would also be managed based on syariah principles, such as:

Malaysia has been rated as the No 1 Muslim-friendly travel destination in MasterCard-CrescentRating Global Muslim Travel Index (GMTI) for 9 consecutive years.

With the rise of ‘halal tourism” as Muslims make up one of the fastest-growing segments of the global travel industry, Malaysia is looking to get a good slice of the $180 billion market.