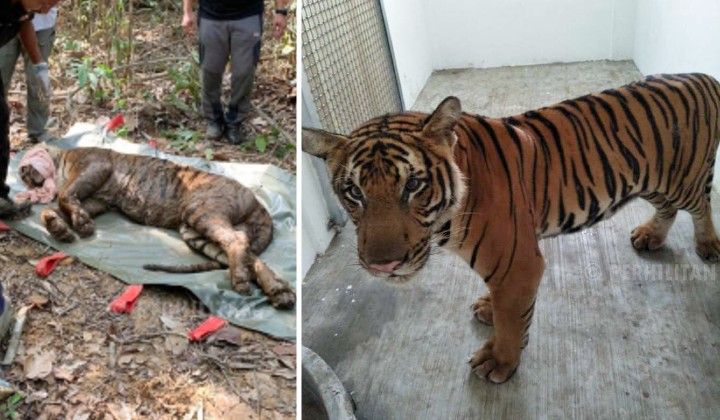 Remember the tigers strolling down the road last week? Well one of them has been caught.

Awang Besul is the name that has been given to the 5-year-old male tiger that the Wildlife and National Parks Department (PERHILITAN) had caught last Friday (July 19).

This suspicion arose after observations by specialists who saw the condition of the tiger which was dehydrated and had swollen legs.

Canine Distemper Virus (CDV) is a type of disease that causes an animal to be confused and does not follow its predator instinct.

This may be the reason why it does not harm humans and livestock that come into its path.

A normal tiger will not refuse to (eat) man or livestock.

Normally the CDV attacks domestic cats and dogs, though it is not rare for wild animals like tigers, wolves, and foxes, to catch the virus as well.

Kadir also denies that the tiger is tame and has an owner.

Malayan Tigers are a protected species that need special permits for those who want to adopt the animal.

Although the CDV is deadly, Awang Besul is now reported by PERHILITAN to be at the National Wildlife Rescue Centre (NRWC) in Sungkai, Perak where he is eating and drinking well.

The blood tests from the tiger have been sent for analysis and will return within two weeks.

For now, Awang Besul is quarantined in NRWC under observation by a specialist.

Currently, there are a total of 4 traps that have been set up to catch the other alleged tiger, with more men locating the animal around one kilometre around the village.

These traps will be left for a week or two to see if there indeed was another tiger.

Kadir explains that it is usual for males to move alone, unlike females who move with their offspring or in a group whilst hunting.

Hope Awang Besul recovers well and continues to be the kind and handsome tiger it is.

This Cat ‘Buys’ Fish With Leaves, But Some Are Not Buying The Story