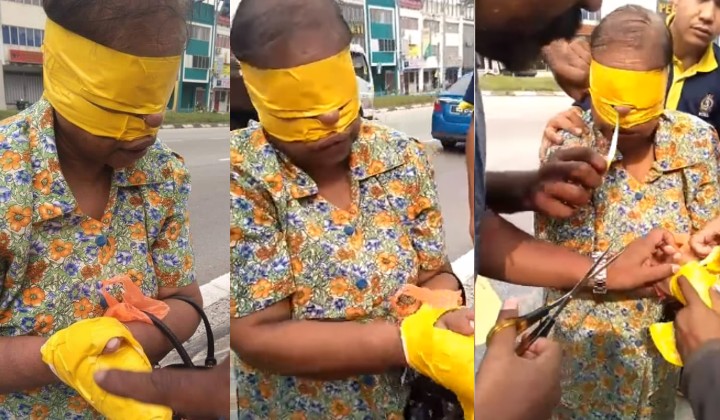 Malaysians are shocked and outraged following news that an elderly woman had been abducted and robbed.

The tragic incident befell a helpless 66-year-old lady who was left with her hands tied and eyes blindfolded with tape at a cemetery in Taman Setia, Rawang yesterday morning after she was mugged of her belongings.

Video footage showing the woman being aided by members of the public was also spread on social media.

According to reports, the auntie had apparently made the honest mistake of accepting help from a couple of ruthless, heartless individuals who offered to gave her a ride while she was waiting at a bus stop in front of Klinik Kesihatan Rawang.

It was then that the poor old lady was driven off as a hostage by a woman and three other men.

The vile suspect made away with two gold earrings, RM110 in cash as well as the medicine she had received from her doctors visit, totalling to around RM3,000 before ditching her at the said Indian cemetery.

Although visibly shaken from the incident as seen from the video, thankfully the senior citizen was left unharmed.

Netizens from all corners of the net who are equally distressed by what had happened can be seen sharing their honest thought on what had transpired. Here’s what some of them had to say;

Police are now conducting a wide search for the suspects and the case is being investigated under Section 395 of the Penal Code for gang-robbery.

Factory Linked To Water Cut To Be Demolished By Authorities, Owners Remanded For Polluting River