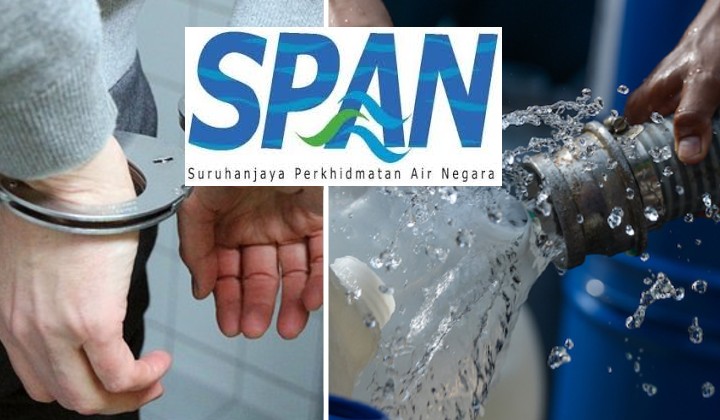 A press statement has just been released by the National Water Service Commission (SPAN) announcing that a police report has been lodged to investigate the water pollution that occurred over the weekend.

In their press statement, SPAN highlighted that legal action will be taken on the perpetrator who had caused the terrible water disruption.

SPAN has also called for the action of Hulu Langat local municipal council and the Environmental department for stern actions.

As of 3.30am this morning, water should be flowing back into our pipes, says Syarikat Bekalan Air Selangor Sdn Bhd (SYABAS) in their official press statement this morning at 7am. With the expectation of 100% water supply restoration by midnight tonight.

Although SYABAS is still supplying some freshwater supplies to certain housing areas today.

The official announcement of scheduled water disruption of up to 4 days affecting Klang Valley users.

Three main plants were shut down, affecting over 1 million people from 7 districts.

By 7pm, all three plants were free of odour pollution, hence operations were resumed.

The scheduled water disruption from July 23 was also cancelled.

â€œAs we and the state government are unable to detect the cause of the pollution, this incident can repeat itself. Therefore we cannot give a timeframe on when the water supply will be restored at this time,â€ Air Selangor CEO Suhaimi Kamaralzaman said in a statement. pic.twitter.com/PnPGqZiRpb

About 60% of those affected by Friday’s water cut have had their water supply restored.

Water, Land and Natural Resources Minister Dr A. Xavier Jayakumar claims that odour pollution was “quite common” in Selangor.

Though an investigation team was dispatched to find out the cause and the Batang Kali area was said to be the source of the pollution.

The raw water supply in Selangor river was polluted with diesel, two pictures of the oil spill were released on SYABAS’ Twitter account.

Later, the diesel pollution was traced to have been caused by sand digging activities at the upper reaches of the Selangor river.

SYABAS currently continues to supply water via water tankers to various parts of the Klang Valley and has informed that more information will be released from time to time.

For further details on the situation, you can update yourselves through these portals:
1. SYABAS website, www.syabas.com.my
2. SYABAS Facebook,
3. SYABAS Twitter, @air_selangor
Or download the Air Selangor mobile app on Google Play or Apple App Store.

We hope this water issue resolves soon, tell us on Facebook or Twitter if you have been affected by this water crisis.