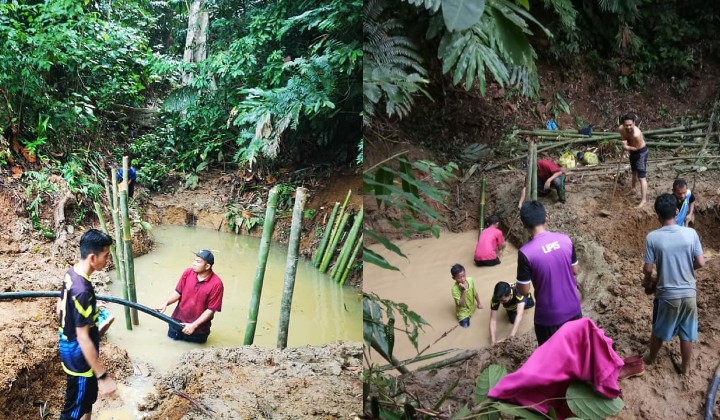 Sometimes, if you want something done, you just have to done do it yourself…

After being fed up of not having a reliable water supply, one school in Pahang decided to build their very own reservoir to provide them with an unlimited supply of fresh, clean H20.

Sekolah Kebangsaan SK Betau is located in the small but vibrant Orang Asli settlement of RPS Betau, situated on the outskirts of Raub and Kuala Lipis, Pahang.

Speaking of vibrant, the settlement seems like a really friendly and tight-knit community.

After some Googling, we found that the kampung even has its own Facebook page, and it appears to be quite active too.

ANYWAY. According to reports, the school has been troubled with water shortages for quite some time, making class sessions very difficult for both students and teachers. (I mean school itself is already a chore, but not having running water makes it HELL…)

This was especially so for students who lived at the schoolâ€™s boarding hostels. The students reportedly had to bathe and wash their laundry in a nearby river! (now THAT’S an EDUCATIONâ€¦)

So, with a makeshift construction crew made up of students, teachers and super responsible parents, the team set to work on the DIY dam with nothing but their bare hands, some tools and a whole lot of bamboo.

The construction of the reservoir took the group just one week to build. (thatâ€™s pretty quickâ€¦  considering its taking Selangor FOREVER to get things done here… LOL JK…)

But building it wasnâ€™t without its share of difficulties.

The group had to trek through the jungle and climb a hill carrying the materials needed with them, spending days wallowing in the muddy, humid, mosquito-biting rainforest in order to have access to the most basic of human necessities.

However, in a statement issued by the Pahang Education Department, claims that the school had been suffering from continued and prolonged water problems were rather inaccurate, stating that a construction project nearby was the cause of the water interruptions at the school.

â€œWe have discussed with the contractors and they will get to work on fixing the problem today.â€

â€œWe also requested for a second water pump to be constructed.â€

Living in the big city, it’s easy to forget that we are somewhat lucky to be able to look at such things as water, electricity, plumbing, and (thank the gods…) LTE connection, and assume that these vital essentials are and should be readily available and accessible to everyone in Malaysia Baru.

When in truth, there are still areas and communities across the country that are lacking in infrastructure and public amenities.

Let’s together look in empathy at the example shown by the fine students, teachers, and parents of SK Betau and have a little kerja sama towards building a radically wholesome, all-inclusive and all-accessible modern nation and to not just rely on our pre-installed institutions.

If youâ€™d like to check out what the peeps at SK B did, have a look at their Facebook page;