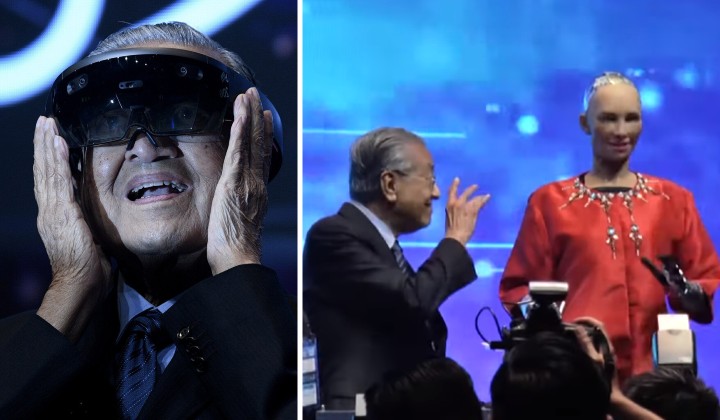 Sophia, the woman-like robot adorned a red modern baju kurung had stunned Dr. Mahathir when he first saw her.

So much so that Sophia had to break the ice with Dr. Mahathir.

Good morning, Mahathir. Iâ€™m excited. I hope it is not too late to wish you congratulations on your re-election and happy 94th birthday.

As the ball got rolling, Sophia continued to dazzle Dr. Mahathir with facts and figures of his tenure as Prime Minister.

When Dr. Mahathir asked her if she knew anything about his first term as prime minister, she instantly answered the number of days he since he was first sworn in as prime minister on July 16, 1981; which was 13,881 days ago.

Dr. Mahathir then asked what made Sophia special compared to other robots.

Well, for starters, most other robots don’t get to hang out with the Prime Minister of Malaysia.

Well, come to think of it, how many of us Malaysians have even met Dr. Mahathir?

It is reported that whilst Sophia was chatting with Dr. Mahathir, she was sketching something.

Only at the end of the 8-minute conversation, it was discovered that Sophia was in fact sketching a black-and-white portrait of him!

Dr. Mahathir said that Sophia doesnâ€™t only amaze him but also terrifies him.

If I were to meet her in the middle of the night, I will surely flee

Dr. Mahathir to The Sun Daily

Though in her spare time, she travels the world to meet people.

If you are interested in meeting Sophia, she will be in Kuching this weekend (July 20 and 21) at the Beyond Paradigm Summit.

In the meantime, you can watch Dr. Mahathir interacting with Sophia in the short video by MITEC below.