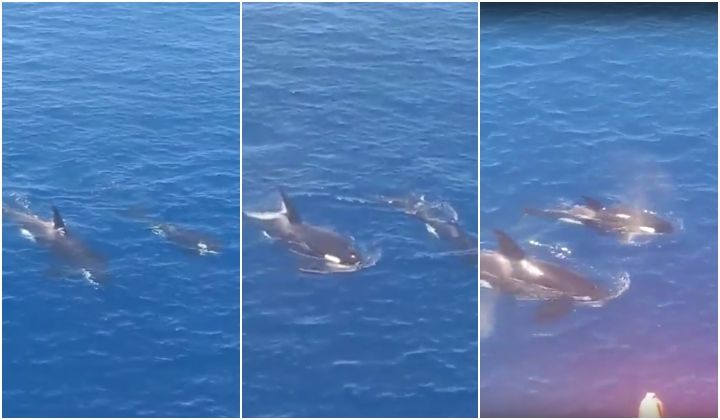 Does anyone here remember the Free Willy movie?

Looks like Willy has found his way to the warm waters of Malaysia as a pair of orcas, or killer whales, were spotted in Terengganu waters for the first time!

The marine giants – estimated to be between 6 and 8 metres
long- popped up near the Pelantar Dulang Petronas oil drilling platform, off
Kerteh, on Tuesday (16 July). The scene was quickly recorded by those working
on the oil rig.

Most importantly though, they believe this is the FIRST time orcas have been spotted off Terengganu’s coast.

â€œBased on records at the Rantau Abang FRI or the Malaysian Fisheries Department, the Orca Whale has never appeared in Terengganu and the date, July 16, 2019, is historic as it was the first time the mammal was seen in Terengganu waters.â€

Although this is the first time that orcas were seen in Terengganu waters, itâ€™s hardly surprising as theyâ€™ve got quite a wide range in their habitat- found in all oceans and most seas.
Orcas have been spotted in the waters of Iceland, Argentina, New Zealand and Japan!

By the way, did you know that killer whales are not really
whales? They actually belong to the dolphin family.

And the origin of the â€œkiller whaleâ€ name is a mystery. Though there is a theory that the name simply evolved over the years from the past when whalers called them â€œkillers of whales.â€

Which makes sense because even Mohd Tamimi mentioned that orcas are a much-feared species. Theyâ€™re highly skilled hunters at the top of the marine food chain.

These creatures eat seals, turtles, seabirds as well as SHARKS and DOLPHINS!

Despite their fearsome nature, we canâ€™t help but think that they look so dang CUTE! (blame Free Willy).

Just look at how graceful they are in the Terengganu waters: