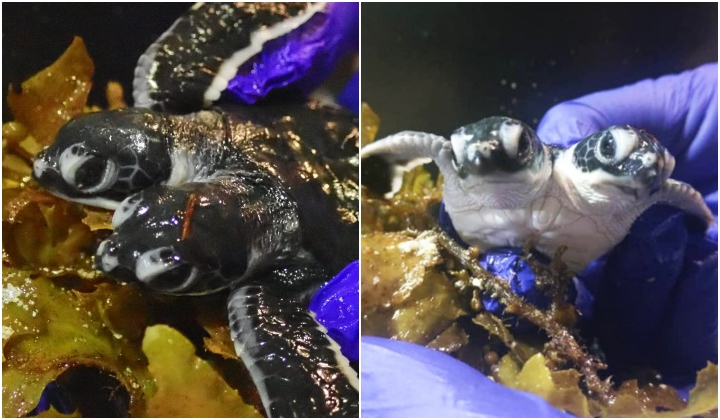 Turtle conservationists on Pulau Mabul were surprised to find a two-headed turtle hatchling on Monday.

According to The Borneo Post, the baby turtle emerged from a green turtle nest at the Mabul Turtle Hatchery run by SJ SEAS, in Semporna, Sabah.

SJ SEAS chairman Mohd Khairuddin bin Riman expressed his amazement at the sight of the turtle.

â€œWe have released around 13,000 hatchlings from the hatchery and have never seen anything like this before. The Sabah Wildlife Departmentâ€™s Honorary Wildlife Wardens (HWWs) were all intrigued, as well as busy â€“ we had two batches of hatchlings emerged last night and yet another turtle nesting!â€

According to Marine Biologist and Conservation Manager for SJ SEAS, David McCann, the two heads of the turtle breathe independently of each other and react to stimuli separately.

â€œIt is utterly fascinating. The right head seems to control the front right flipper, and the left head the front left flipper. Yet they are capable of co-ordinating their movements in order to walk and swim.â€

Meanwhile, Dr Sen Nathan, Chief Veterinarian for the SWDâ€™s Wildlife Rescue Unit said that while the condition, named Dicephalism, is rare, it isnâ€™t unheard of as there was a similar instance in 2014 in Redang. The hatchling was studied for three months before it sadly died from pneumonia.

â€œUnfortunately, these turtles would not survive in the wild â€“ including this specimen, whose plastron is not fully developed or closed. Observation by the biologists on site also indicated that in deeper water, one head couldnâ€™t get above water comfortably to breathe. The hatchling is being kept in shallow water allowing it to breathe easily.â€

Director of the Sabah Wildlife Department, Tuan Augustine Tuuga, said that since green turtles are completely protected by law in Sabah, the baby turtle will be kept under observation by the Mabul Turtle Rehabilitation Centre.

The authoritiesâ€™ primary concern is for the hatchlingsâ€™ welfare, and as such, although the two headed baby turtle may not live a long healthy life, they will do their best to ensure it is comfortable and well taken care of.