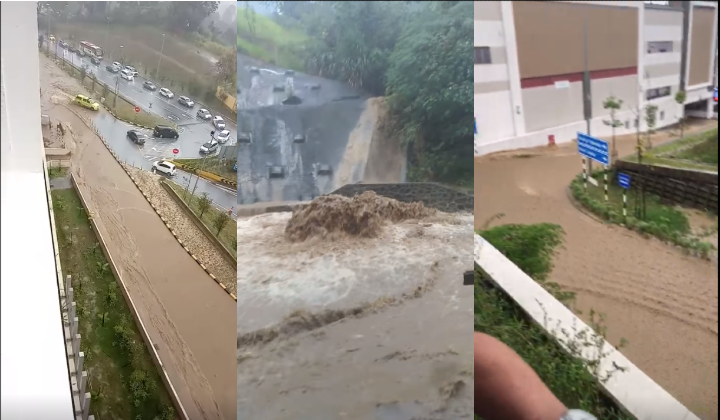 From fiery displays of pyrotechnics to splashing wet works, Genting Highlands really does have it all…

Malaysian social media has been blowing up with viral footage and images of the flash flood that happened on top of the highland resort over the weekend.

The heavy downpour which lasted for over two hours had caused flooding and heavy mudflow on the sloped roads surrounding the Genting Premium Outlets and the Awana Skyway recreation centre.

The unexpected act of nature left several visitors and motorists marooned, unable to escape the rapidly rising and flowing water, causing an unavoidable traffic jam on several roads leading up to the resort.

“A BMW being carried away by currents. Location Genting Highlands…”

“I was there yesterday! Even the cable car ride was stopped three times (during the rain). So terrefying, glad I didn’t threw up…”

Apparently, the drainage systems in the area were unable to accommodate such an abundance of fluids, causing it to spill over onto the streets and surrounding areas.

Fortunately, there were no injuries reported from the incident, and itâ€™s back to business, as usual, up in Malaysiaâ€™s very own city in the clouds.

The country is bound to be pounded by heavy rainstorms following the coming of the seasonal monsoon rains.

Several other nations in the region have already been affected by the magnificent storm system blowing across South Asia, affecting millions of people and claiming thousands of lives in India, Nepal, Bangladesh and Pakistan.

Try to keep dry and be safe out there guys…