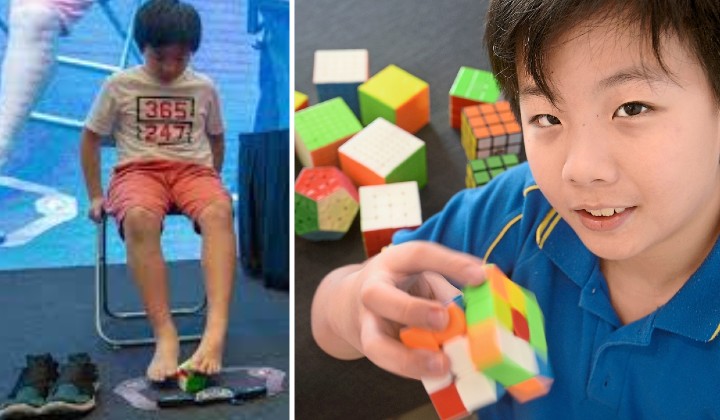 Last Sunday, an 11-year-old boy from Petaling Jaya made Malaysia proud when he became the FIRST Malaysian champion at speedcubing with his feet at the WCA (World Cube Association) World Championship 2019
in Melbourne.

With his win, he is now officially ranked second-fastest IN THE WORLD for speedcubing (using the 3x3x3 Rubik’s cube) using his feet.

Yes, you read that right both times. With his FEET guys!

Although Lim Hung only began his unusual puzzle solving hobby 3 years ago, he managed to beat 59 competitors from 21 countries and earn himself first place.

Speaking to The Star, Lim said participating in the biennial world championships in Melbourne initially posed a challenge to him as the competition was held during the winter. Lim felt as if he would not be able to perform well in the cold weather.

On top of that, Lim was very nervous he would be competing with world-class cubers that were present at the championships.

However, throughout the competition, Lim had his supportive mother by his side. Joyce Peh accompanies her son to all his tournaments, with Melbourne being his 28th competition so far.

As an encouraging mother, Joyce believes that there is more to life than winning, and only hopes that her son becomes a good example and inspires others.

Now that he’s won first place in speedcubing using his feet, Lim plans to contest in blindfolded speedcubing next!

We wish the little nimble genius all the best and look forward to him winning more medals in the future!