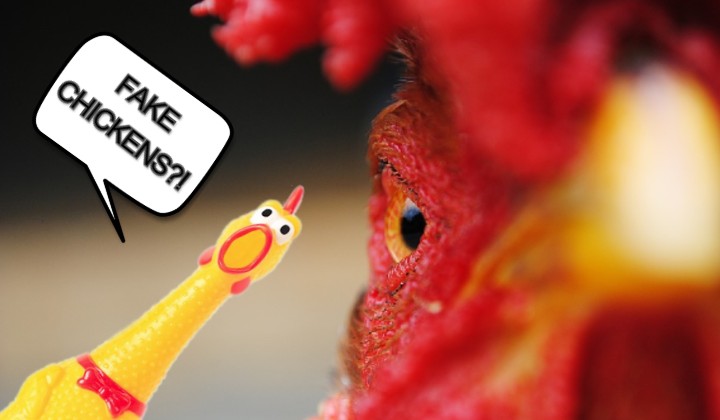 Chicken lovers are cautioned to be on the lookout for fake poultry products that are disguised as good olâ€™ tasty ayam kampung.

The forged chickens’ are apparently being coloured and dyed to imitate the authentic look of the real thing (this being ayam kampung of course…) and sold off in markets and restaurants all over the Klang Valley area.

These chickens basically live their lives feeding off the land, clucking away at the farm, minding their own business until the day arrives when they are taken off to be slaughtered.

Kampung chickens are different from the regular â€˜broilerâ€™ chickens which are bred specifically for meat production.

These chickens are usually cooped up in large commercial poultry farming facilities where they are usually fed with industrialised chicken feed and shot up with a whole lot of antibiotics to keep them healthy for consumption. (Ummmm, yummyâ€¦)

This warning came from a group of chicken breeders from the Persatuan Pembiak Baka Ayam Kampung Warisan Malaysia that told of dishonest traders who have been duping consumers by passing off these fakes at a considerably cheaper price.

This case of stolen chick-dentity was made problematic by the fact that even the professionals were not able to tell the fowl apart.

According to the group, seasoned breeders were also being misled by the sham having even classified the imitations as â€˜mixed ayam kampungâ€™ or chickens that have been crossbred together.

So how can regular consumers tell fake ayam kampung from the real ones?

Well according to the professionals, the best way to get authentic and genuine poultry is to get it directly from the source and purchase ayam kampung only from certified and genuine farmers and breeders.

Consumers are also told to keep an eye out for suspiciously Yellow-stained chickens, in order to tell if the difference between authentic and fake ayam kampung.

So in order to pass these forged ayams as the real deal, the fakes are reportedly soaked and coloured in Aniline dye – an industrial pigment used in the colouring process for leather and woodworks – to imitate that natural look.

UK And Europe Face The Biggest Bird Flu Outbreak This Year, 48Mil Birds Have Been Culled