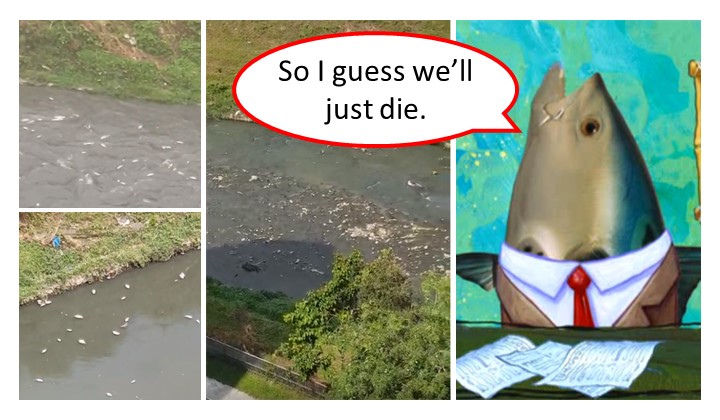 Concerned citizen Craig was shocked when he looked out the window of his condo to see thousands of dead fish floating down the Damansara river last Saturday, 13th July.

His condo, Aragreen Residences, is right next to the Damansara river. The river is a thriving ecosystem as Craig reports seeing large birds like kingfishers and even river otters feeding at the river.

Craig, an Ara Damansara resident for 3 years, says he and his 6-year-old son loves waking up every weekend and watch the wild life in the river.

“It’s the perfect eco system,” he tells The Rakyat Post, claiming that the river is home a many kinds of large and small fish such as tilapia, catfish, and peacock bass.

It’s distressing for him to witness this destruction of a wonderful piece of nature, which is already rare in the city. He’s never seen anything like this before.

“The smell of dead fish was everywhere in our basement car parks.” he claims.

The next day, he was further upset that even more fish turned up dead, possibly washed away by the heavy rain in the afternoon.

When we reached out to Craig, he expressed his concerns over the unknown cause of the dead fishes, especially since people like to fish there during the weekends. He is worried that there may be poison or pollution that is destroying the river’s eco-system.

Other citizens also took to social media to report seeing the dead fishes in the Damansara River as well.

He has already reached out to Lembaga Urus Air Selangor (LUAS) regarding this matter, but the cause is still unknown.

He also said that the Aragreen Residences management body has taken water samples for testing as well.

We urge anyone who has information to reach out to LUAS or to us on our Facebook or Twitter accounts.

Contractors have been notified to clean up the river and legal action would be taken under the Environmental Quality (Sewage) Regulations 2009.