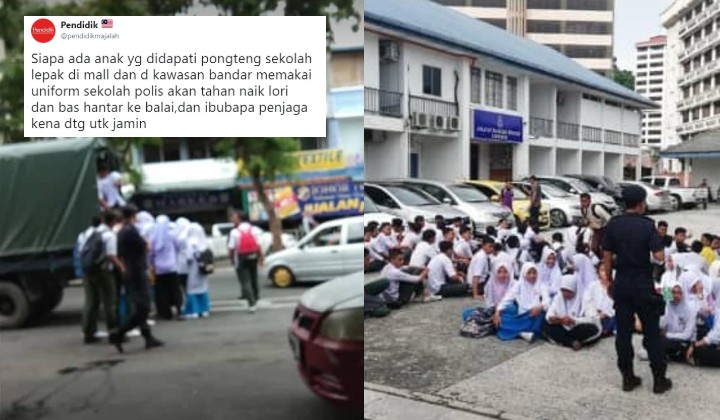 It seems as though sometimes thereâ€™s little that adults can do when trying to separate delinquent kids from committing countless misdeeds, like cutting class and skipping school for instanceâ€¦

Well, trending on Twitter today is one sure-fire way to keep truant schoolchildren, wellâ€¦ in schoolâ€¦ (simply by scaring the living sh*t out of emâ€™….)

Based on a tweet posted by the Majalah Pendidikan official account, any students found to have jumped the fence (both metaphorically and literally speaking…) and loitering around instead of being in school will be instantly apprehended by the police.

According to the posting, students who are caught in uniform pottering at the mall or among the many lepak sites around the country will immediately be sent straight to the nearest police station, only to be released upon collection by their parents or guardians. (would they need to pay for ikat jamin though?)

And the kids are going there in style tooâ€¦ According to the tweet, these naughty little scoundrels will be shipped off in the back of a police lorry (you know the ones youâ€™d see those banduans riding inâ€¦)

Images accompanying the tweet showed glimpses of what might just happen if you were to get caught playing hookey.

The first image showed a group of secondary school kids being escorted away by officers in the back of the mentioned banduan transport, while the second picture showed the few unlucky teens sitting cross-legged, together in a parking lot of a police station.

Apparently, this particular group of kids were angkut-ed in Sandakan, Sabah

The tweet which came out on July 9 had since made rounds on social media, gaining the attention of netizens who are clearly in support of the fear-tactics used to keep kids in school.

“Good. Let’s together create and control (the youths of) our generation.”

“Great. I support this. Parents should be held responsible (for their kids).”

“Sometimes I just don’t understand why kids would want to skip school, what’s the motive? If they’d want to hang out and have fun, do it on a weekend… Kids are weird.”

Some also took time to reminisce on moments from their own youth, sharing their own delinquent experiences.

“Hahaha… This is similar to what happened during my time as a form two student, getting picked up for going to the cyber cafe. we all were sent to the police station and everyone had to take the bus back to school. The best part is, I’m the son of the teacher at the school.”

“During my day, I was cool, so I just went home and told my parents that my motorcycle got a flat on the way.”

“I have never been caught cutting school. (These kids) don’t even know how (to skip school).”

“Right… If you want to skip school don’t wear a school uniform… Don’t (they) ever learn?”

“During my time, I just cut class at the mamak stall close to school. Would scram if I saw any auxiliary police lurking about.”

However, quickly looking back at recent times, this isn’t the first account of such draconian actions that have been taken to prevent kids from cutting school. Throughout the years’ countless operations have been conducted by the government, schools as well as enforcement agencies to curb the truancy amongst schoolchildren in Malaysia.

Just last month there were 3,992 cases of school truancy recorded thus far in the year in the state of Johor alone.

Which begs the bigger question, are standard scare-tactics such as threatening our kids with jail time really make an impact on cutting down the number of ponteng cases in the country?