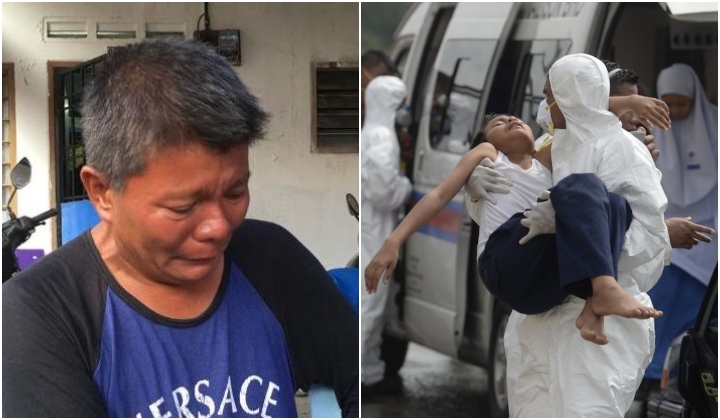 Since mid-June, many Pasir Gudang residents have been rushed to the hospital for having breathing difficulties, vomiting, and fainting.

This is the second time such an incident has happened in Pasir Gudang since the pollution of Sungai Kim Kim in March.

Although the Sungair Kim Kim incident appears to have resulted in a 12-year-old boy being diagnosed with myokymia, there has not yet been any reports of fatalities due to the pollution in Pasir Gudang, up until recently.

For the past couple of days, several social media pages and news sources claimed that a woman who lived in Pasir Gudang died due to breathing difficulties believed to have resulted from exposure to the pollution in the area.

The claims were based off a report by Bernama News Channel who interviewed the womanâ€™s husband. In the video, the man had just laid his wife to rest and he was visibly distressed over her death.

In the video, he explains that despite wearing a mask, his wife suffered breathing difficulties and had to be rushed to the hospital.

The womanâ€™s death obviously angered many Malaysians who have been concerned about the well being of the people in Pasir Gudang.

Thus, the news of the womanâ€™s death went viral. Even Najib posted his two cents over it.

Now, the Health Ministry has refuted the claims calling them nothing but rumours.

Health Minister Datuk Seri Dr Dzulkefly Ahmad said the woman has been suffering from chronic hypertension for the past 10 years.

“She was brought to Hospital Sultan Ismail (HSI) Johor Baru on July 5 after experiencing difficulty in breathing and coughing for three days. Her legs were also swollen and she had a fever,”

The woman was reportedly warded at the hospital while the medical team there tried their best to treat her. Unfortunately, her condition became more serious and she eventually passed away at 4.20am on July 6 from decompensated heart failure.

According to Dr Dzulkefly, the ministry has no records to show that the woman was treated at the hospital during the height of the Sungai Kim Kim incident nor during the recent pollution incident.

The husband of the woman has also come forward to clarify what happened to his wife.

He told local news portal, Harian Metro, that he was shocked when the police contacted him for a statement over the viral rumours as he had never been contacted by the police in his life.

â€œIf the doctor was honestly carrying out his duty when he tried to save my wife, and was honest when he told me that she could not be saved, then I accept it.

However, if he was being dishonest about it, then I would not know”

He added that he has come to terms with his wife’s death, though, is very upset that his wifeâ€™s death has become a viral issue.

Iâ€™m disappointed that no NGOâ€™s came to speak to me about it. Instead, I saw my wifeâ€™s photos and the news of her death being tied to the Sungai Kim Kim pollution on social media.

This also resulted in people berating me with questions over her death.

Speaking about his Bernama interview, the man said that the interview took place after he completed his wifeâ€™s funeral prayers and he was berated with questions by journalists which caused him to become confused.

My statements were twisted, I was still grieving and just finished burying my wife before some reporters from unknown agencies came up and asked questions.

I would like to apologise if anything I’ve said have been misinterpreted, and I do not want to blame any government agencies or department.

A Bakar via The Star

He also explained that two days after the Sungai Kim Kim incident in March, his wife suffered asthma attacks and sought treatment twice at a private clinic.

He has urged the public to respect the privacy of his family and avoid sharing false information about his wife’s death.