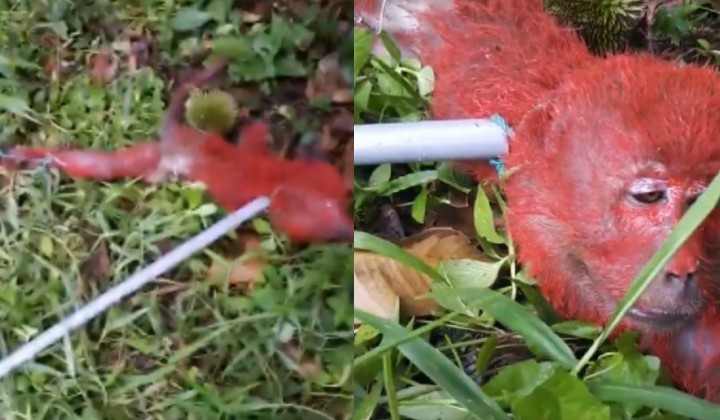 Though just recently a goose, a chicken, a cat, and oddly enough, even a bear had been the sad victims of our arrogance as supposedly intelligent human beings. It would appear that even our own simian cousins aren’t safe from becoming the subject of our species neverending ill-treatment and cruelty.

A video of a monkey captured in a durian orchard for trying to steal some of its harvests is making rounds on social media.

In the 46-second clip, the poor animal can be seen laying flat on the ground, bound by both its hands and feet with several durians scattered by its side.

Its body covered in red paint supposedly done so by the trapper as punishment for the animalâ€™s delinquency.

In the video, a man believed to be the owner of the orchard and the one who captured the animal can be heard shouting his frustration at the monkey.

The monkey responds in clear shock and fear. Laying quiet on the ground as the man rambles on.

Catching word of yet another viral animal abuse incident, netizens came together from all across cyberspace to express their disgust at the cruelty shown towards the small mammal.

“When the monkey turns to Sun Wukong, then youâ€™ll be sorry…”

“If you wanna kill the thing just do it, donâ€™t torture it like that…”

“He must have been keeping a grudge against the monkey. Poor monkeyâ€¦”

While other commenters came to the defense of the captor instead.

Saying that although what was done to the animal wasn’t particularly nice, the intention was not to harm the animal but to punish and give it a lesson instead.

â€œThose who donâ€™t spend time around orchards might not understand. These guys will devour everything, even steal your underwear. Kids who venture too close get chased down by a gang of monkeys. Try visiting an orchard and see. Nothing can be done except to shoot them down with rifles.â€

â€œCity folks who don’t plant trees don’t know anything. At least (the captor) didn’t kill, or cut off its arms. The red spray is just a lesson. Stay in a village then youâ€™ll know.â€

Whatever the reason may be, it is clear that some of us will never learn to show other creatures the dignity, respect and perhaps a tiny bit of humanity, that all living beings deserve.

You can catch the full video on the MEDIA #DTTB Facebook page.