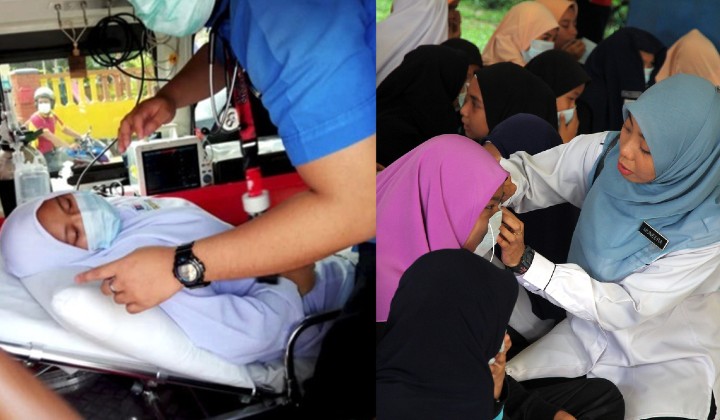 Last week, the Pasir Gudang situation seemed to be getting better.

The Malaysian Health Ministry and Environment Ministry had identified the poisonous gasses causing the mysterious illnesses.

Schools were also finally allowed to reopen yesterday after being closed for 4 days.
Itâ€™s all getting better…. right?

Ambulances from the Civil Defence Force and Sultan Ismail Hospital were seen speeding to the school and worried parents were taking their kids home.

But after screening, 30 students and teachers from 15 schools were referred to the Masai and Pasir Gudang Health Clinics.

According to Bernama, Mohd Khuzzan also noted that most of the students who experienced the symptoms were in higher level classrooms.

So what happens now?

The authorities still do not know who is/are the culprit behind the three hazardous gasses found in Pasir Gudang.

However, the DoE will be meeting with operators of 250 chemical factories in Pasir Gudang today to address safety measures.

As for the kids, schools will remain open as usual, but on standby to speed to the nearest health clinic if anyone is sick.

While the current air quality readings at Pasir Gudang were shown as normal, there is still much concerns over the toxicity of the hazardous acrylonitrile, acrolein and methyl mercaptan fumes.

According to Dr Zulkifli Abdul Rashid, a senior lecturer at the chemical engineering faculty of Universiti Teknologi Mara Shah Alam, exposure to acrylonitrile gas daily or over an extended period of time can cause cancer.

(Read more about the dangers of the gasses HERE)

While we wait for the Pasir Gudang situation to be resolved by the authorities, we urge members of the public to be vigilant and report any suspicious activities.