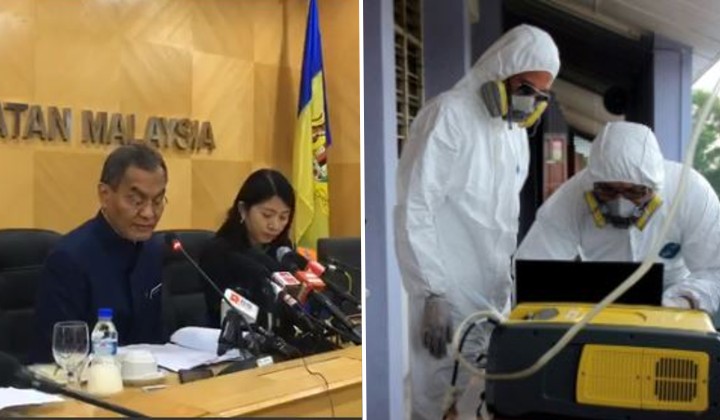 Today a press conference was held in Putrajaya by the Health Ministry to address the air pollution issue in Pasir Gudang that started on June 20, 2019.

Present at the conference were Health Minister Dr Dzulkefly Ahmad, Energy, Science, Technology, Environment and Climate Change Minister Yeo Bee Yin, and both the Director Generals of Health and Environment.

Up till midnight June 27, Dr Dzul reports that there have been 709 patients treated in relation to this issue, of which only 10 were admitted.

The 10 patients who were admitted are said to be from 8 different schools. Hence, it is difficult to precisely determine cause of this matter.

There have been no ICU admissions nor deaths.

We need 2 things to define a poisoning, laboratory findings and clinical signs and symptoms.

There were no poisons traced in urine or blood.

So without having any definitive poison traces in patients and vague signs & symptoms, ministries are planning to solve the issue at hand; which is the air pollution.

With over 2000 licensed factories and more than 10% (250 to exact) of them being chemical plants, it is not shocking that the air quality in Pasir Gudang district is “highly saturated with chemical gasses”, as quoted by Yeo.

The 3 dangerous gasses that were discovered were Acrylonitrile, Acrolein and Methyl Mercaptan.

All three volatile gasses are colourless and cause vague symptoms like nausea, vomiting, headaches and breathing difficulties.

Acrylonitrile is known to have a pungent, onion-like odour. Normally present in the rubber and plastic industry, it can impair judgement.

Acrolein on the other hand, has a disagreeable choking odor that is very toxic by inhalation. It is normally found with other chemicals in the plastic industry.

Dr Dzulkefly then continues that at one point, there was about 120-130 parts per million (ppm) of Methyl Mercaptan in the air.

According to NIOSH an exposure to 0.5ppm in a working place is already considered hazardous.

What is Methyl Mercaptan?

Methyl mercaptan is flammable in large quantities and is found in coal tar and petroleum distillates.

Yes, in large quantities, it is toxic and can affect the central nervous system.

Generally because the smell comes from decaying matter or faeces. Thus, it has a putrid smell of something like rotting cabbage or flatus (yes, like your fart).

According to the National Center for Biotechnology Information (NCBI) which is part of the US National Library of Medicine, an exposure of 0.0019 ppm in the air itself would cause a distinct level of odour awareness.

This is consistent with the reports that an unpleasant smell was noticed by the teachers.

So what is the government going to do now?

Besides all the things the government has done so far, Yeo has stressed that the 2 measures that will be taken are:

Between the schools and the chemical plants.

As currently, physical barriers wonâ€™t serve a purpose because the particulate matters are disposed in the air, this according to Dr Dzul.

This would be a first in our country.

Yeo also mentions that they will ensure that the air quality of Pasir Gudang district to be cleaner, even cleaner than required.

To not only meet the standards but even better quality than the current standards.

Are there plans to relocate the factories?

It is still in discussion.

Yeo has informed Johor Menteri Besar of this issue. However, it is up to the state government to instruct such moves.

To watch the full conference, watch below on the Health Ministries Facebook page.