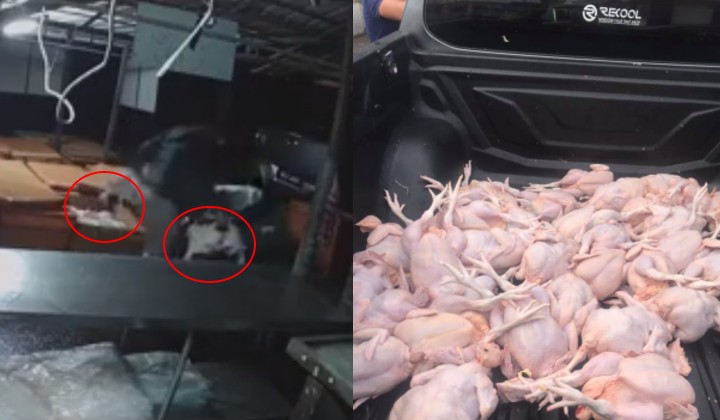 Talk about a case of bad c-luck.

Two men were arrested in Sungai Petani, Kedah yesterday
after they were caught red hen-ded trying to sell off 400 raw chickens
which they had stolen the night before.

According to police, the two local suspects (a 21-year-old and a 26-year-old) were appre-hen-ded at around dawn while they were busy fixing-up shop, arranging the chickens which they apparently stole from a chicken processing plant.

Apparently, the owner of the processing plant had noticed that his facility had been broken into during the wee hours of the morning.

The culpritâ€™s acts were even caught on video by the plantâ€™s
CCTV.

The viral video shows three individuals hastily ransacking
several large containers and tossing a bunch of raw chicken into the
back of a pickup truck.

Police are currently still looking for the third suspect of the flock.

Look like these boys would have devil-eggs to pay for…