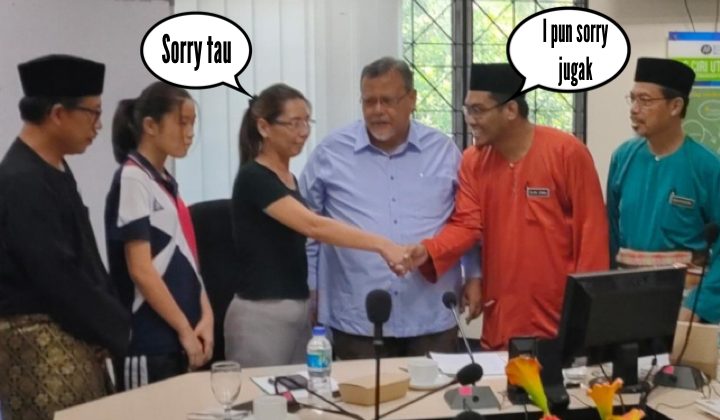 The incident involving a teacher in Johor who caned his student for calling him a derogatory name has been settled amicably between the student’s mother and the teacher.

During a closed meeting with the Johor Education Department at the District Education office yesterday (June 27), the student, her mother and the teacher decided to reconcile their differences and apologized to each other over the incident.

Johor Education, Human Resource, Science and Technology Committee chairman, Aminolhuda Hassan, who was present during the meeting advised all parties to refrain from dragging out the issue as it has been handled amicably between those involved.

â€œAt the same time, the female studentâ€™s family has also withdrawn their police report and we consider the matter settled.â€

He stated that the Johor Education Department are aware that the teacher and the public are concerned that any further action taken over the incident is done in a fair and just manner.

â€œIn order to ensure a fair solution is reached, the department cannot put aside the existing rules and guidelines, and at the same time we must take into consideration the well being of the teacher and the student.â€

He added that the department considers this a serious matter as it involves the credibility of the teaching profession and the development process of the student.

He asked that all schools and educators to understand how to control their responses and avoid allowing their emotions to take over when disciplining their students.

At the moment, it is unclear if any further disciplinary action will be taken against the teacher. Earlier, police said they are investigating the case under Section 324 of the Penal Code for deliberately causing injury.

Johor police chief Datuk Mohd Khalil Kader Mohd who spoke to Malay Mail, said investigations will continue on the police report lodged by the studentâ€™s mother, despite the reportâ€™s withdrawal.

According to him, while the police are aware of the reportâ€™s withdrawal, it is up to the Deputy Public Prosecutor (DPP) to close the case.

Earlier this week, a video of the student’s welt marks was viral on social media.