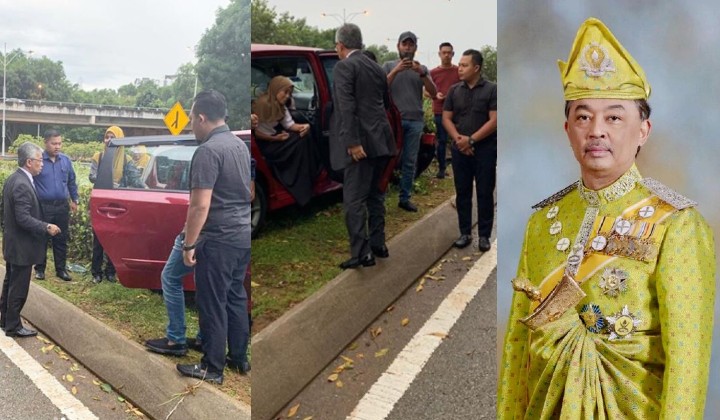 Well itâ€™s not every day that you’ll get a surprise visit from royalty.

A motorist caught in an accident in Putrajaya this morning was met by an unexpected rescue.

Her knight-in-shining- Tengkolok was none other than our very own Yang di-Pertuan Agong Al-Sultan Abdullah Ri’ayatuddin Al-Mustafa Billah Shah. (All he’s missing is a white horse…)

Through a posting shared by the Royal Palaceâ€™s Instagram page, the King is seen together with several of his guards checking up on the scene of the accident, where an SUV appeared to be stuck in the middle of the highway divider.

According to the posting, His Royal Highness was said to be on his way to a pre-cabinet meeting with the Prime Minister when he had stopped his motorcade to aid the accident victim. (Guess the PM would just have to wait…)

The driver of the vehicle, identified as Puan Jasliza Jamil was said to have sustained only minor injuries from the crash, but weâ€™re pretty sure the memory of her fairytale rescue would live on for quite some time.

Touched by the humble act of His Majesty, subjects from across the kingdom came pouring in to share their adoration for the Sultan’s humility.

Next time any of you might have the unlucky fortune of getting into a fender bender, take a quick look out the window… Prince Charming might just come to your aid 😉