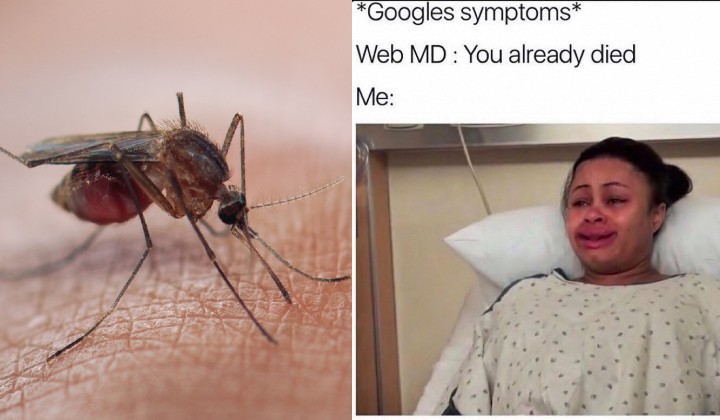 The Health Ministry just confirmed that Kedah has 15 cases of Chikungunya in Alor Setar as of 5pm yesterday, and as of this morning 9 more cases were suspected.

Currently, it has been identified that the cases are contained within the vicinity of shop houses near City Plaza, Alor Setar.

Measures have been taken to check and investigate the area up to a radius of 400metres. Among the steps taken is by eliminating breeding sites of these mosquitoes, as assured by Kedah Health Department Director Datuk Dr Norhizan Ismail.

Malaysia being a tropical country is very famous for vector borne diseases aka diseases spread by insects. Or in this case, mosquitoes.

Are Chikungunya and Dengue the same?

Although, both Chikugunya and Dengue are spread by the same type of mosquito; Aedes.

So what is Chikungunya?

Originally, the name Chikungunya comes from the verb in an African, Kimakonde language that means â€˜to become contortedâ€™, which reflects a lot on its main symptoms; joint pains.

Dengue fever has been known as the â€˜break-boneâ€™ illness, is more of a severe flu-like symptoms disease.

While Chikungunya has only 1 type of virus strain, Dengue has 4 distinct several types.

In both diseases, patients would likely suffer high fevers of about 40 degrees celsius within 4-7 days of contracting the illness.

Patients could also suffer from other accompanying symptoms like nausea, vomiting, rash and headaches.

The key difference between the 2 mosquito-born diseases are,
(1) where the patient comes from (different places have different likelihood of disease)
(2) characteristically cursing pain of the joints
(3) their positive serology tests that is specific to each type of disease.

Talking about fatalities, there is a higher probability of dying from Dengue compared to Chikungunya.

Even though deaths from Chikungunya is rare, the excruciating joint pains persist for months and complications can arise as a consequence.

In both diseases, symptoms are normally self-limiting. Which means, it will highly likely just go away on its own, without any specific treatment.

Though Dengue can progress into a dangerous stage called Severe Dengue where a patient can bleed to death.

The good news about both of these painful diseases are, once you contract either of them, you would attain life-long immunity against the disease.

But since dengue has 4 different types of strains, having immunity for one type of dengue will not protect you from the 3 other types of dengue.

Currently the government is strongly fighting against Aedes mosquitoes, as they are the carriers of the majority of vector-born diseases.

Fogging Doesn’t Really Kill Mosquitos But It Can Harm Bee Colonies, And We Need Better Solutions