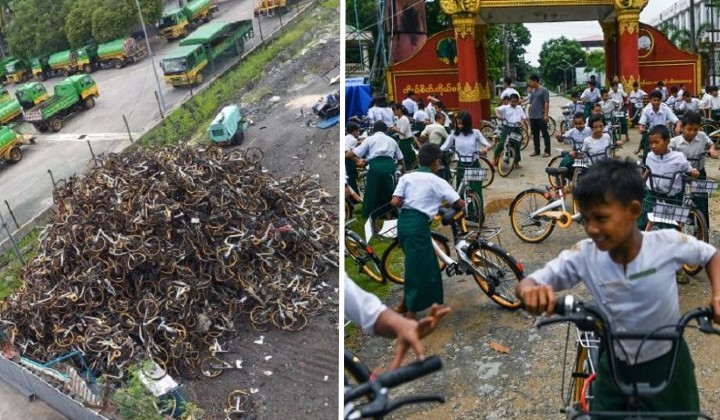 The yellow-silver, stationless, app-controlled bicycles that caught Malaysia by storm around mid 2017 during the SEA games?

The one that DBKL sold off by the thousands to a man who tore it a part for scrap?

Well guess what, the remaining oBikes have been given a new lease of life in Myanmar.

Over 10,000 bicycles that have been abandoned in Malaysia and Singapore were bought by Mike Than Tun Win, the founder of ‘Lesswalk’ a non profit organisation in Myanmar.

About 200 students have received their bicycles and will spend their time more on childlike activities such as playing and studying.

Currently students in Myanmar take up to 2 hours a day walking to school, as their schools are about 10 km away from home.

US$350,000 (RM1,452,535) was spent buying, shipping and refurbishing these bicycles -half of which was paid by sponsors to the trust, the other half by Mike.

The first batch of bicycles have been given out to the less fortunate in Myanmar.

It is estimated by the end of five years, a total of 100,000 bikes would have been distributed all over Myanmar.

This is because more than half of the population live below the poverty line and through this initiative, it will give them easier access to education.