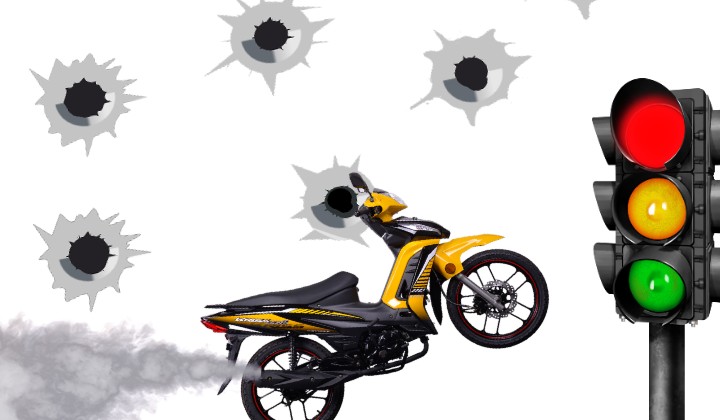 Investigations are now underway on the case involving a man who was shot by a traffic cop during an incident in Kedah.

According to Malay Mail, the policemen who had fired the shot, hitting one of two men on a motorcycle along a road in Alor Setar last Wednesday had done so to stop the duo from causing harm to themselves and the public. (oh, the irony)

The 21-year-old man was riding pillion on the motorcycle of his 22-year-old friend whiles they were heading to work when he was unlucky enough to get a bullet in his arm after he had warned his friend to stop for the law.

Apparently the two men and the officer were involved in a mini high speed chase before shots were fired.

According to police, the rider and pillion who were on a
Modenas motorcycle had first ran a red light, causing the officer who had
witnessed the traffic offence to give chase.

Realising that they were being chased, the motorcycle sped
on, refusing to stop whiles running several other traffic lights along the way.
(we could assume this was when the pillion supposedly told the rider to stop,
butâ€¦)

The duo were even riding so recklessly as to bump against the policemenâ€™s motorcycle in their attempts to escape.

Seeing that the motorcycle had no plans on stopping and to
avoid further threats to his life and the safety of the public, the officer purposely
drew out his weapon and fired a shot aiming for the bikeâ€™s tyres.

But unfortunately, as we all know by now, he missedâ€¦ hitting
the man riding pillion instead.

The intention was to
stop the suspects, NOT to eliminate themâ€¦ (well duh! Of course)

Kedah Police chief Datuk Zainuddin Yaacob say that the
department will conduct a full, fair investigation on the matter and guarantees
justice would be served to those who were involved.