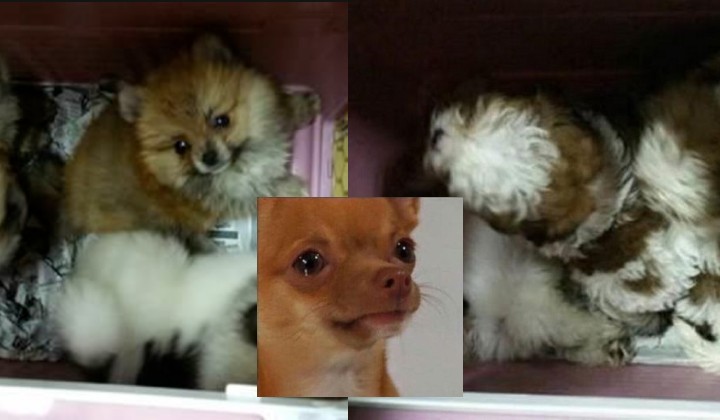 We get it, puppies are ridiculously cute and everyone loves
them, but thatâ€™s no reason to commit a crime!

A Singaporean man found himself in the dog house when he was finally sentenced to 20 months in jail on Wednesday for attempting to smuggle in 23 live puppies.

In 2016, the Singapore Police Coast Guard officers discovered six cages holding 9 poodles, 5 shih tzus, 4 Pomeranians, 3 French bulldogs, and 2 golden retrievers in a yacht when they heard the dogs barking during a check.

The Singaporean court was told that the poor creatures were jammed into â€œrigid pet carriers that were too smallâ€ with no food or water.

Sadly, 11 of the poor doggos died after the discovery
as 10 were infected with parvovirus while one had to be euthanised.

According to the The Straits Times, the puppies were weak and lethargic when rescued from the yacht and soon after started vomiting and having diarrhoea.

The puppies between 4 and 8 weeks old were also most likely unvaccinated.

For this act of cruelty, Cheow Yon Siong was charged for two
offences under the Singaporean Animals and Birds Act. He was also sentenced to 6
years and 6 months in jail last August for drug trafficking.

Cheow didnâ€™t act alone, though. He had a Malaysian accomplice, Yeun Jian Iun who was jailed for 8 months.

The Tail of the Smuggle

In October 2016, Yeun got a call from a man known as â€œMatâ€ who offered him $1,000 to smuggle puppies into Singapore.

5 days later, Yeun met up with Cheow and they sailed off to Sebana
Cove in Johor where a man was waiting for them with 6 cages of puppies.

Huge bath towels were thrown on the cages and lifted into
the yacht which then sailed back to Singapore.

Their nefarious scheme was thwarted when the Singapore Police Coast Guard conducted a check on the vessel and heard barking.

While this story has a bittersweet ending, we urge you to adopt your pets instead of buying them.

NGOs such as SPCA and PAWS have so many adorable four-legged creatures looking for a fur-ever home.

If you still want to buy a pet, make sure theyâ€™re from a licensed breeder. You can check with the Malaysian Kennel Association for that.

Sad tales like these will only end if we step up to be
responsible pet owners.