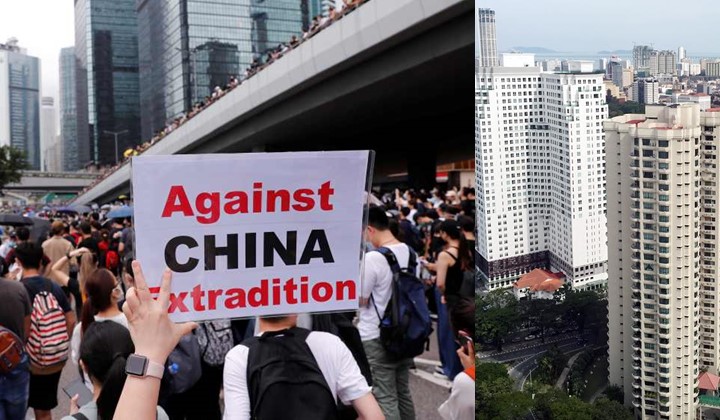 The bill is controversial as passing it would result in opening a “pathway” for people in the city to be transferred to countries beyond the existing extradition jurisdiction. Many are arguing that criminal suspects (or even just people passing through the city) will be allowed to be extradited to China which does not have an independent judicial system.

The little-noticed financial reach but very significant part of the Bill has also struck fear in those with the most at stake. If the bill becomes law, it will be entirely possible for mainland China to freeze and confiscate assets related to those who have committed crimes on the mainland.

Many, especially Hong Kong’s many super-tycoons, have been fearful of how to bill will change Hong Kong’s position as an independent financial hub. In response, Asia’s real-life Crazy Rich Asians have already started moving their money away from Hong Kong.

A third-generation Hong Kong tycoon whose family are large landowners on Hong Kong Island confirms that she has moved her assets off-shore. “It is now about what we can do about our assets onshore [in Hong Kong].”

Other Hong Kong tycoons have done the same, moving their money into Singapore, according to financial advisers, bankers, and lawyers involved. “It’s started,” an adviser says, “Singapore is the favoured destination.”

Over US$100 million (approximately RM417mil) has crossed the borders into Citibank Singapore, with more expected on the way.

It may not be entirely coincidence that Malaysian properties have been snapped up since early this month by Hong Kong investors. High-rise condominium units in Johor have been sold, priced from HK$787,331 (approximately RM419,521) to HK$2.27 million (approximately RM1.21mil).

About 35% of the units were intended as a second home for retirement, according to Terence Law, a senior principle project director at Centaline Property Agency.

The Malaysia My Second Home (MM2H) programme launched by the government is an initiative to get foreigners to live in Malaysia and buy residential property costing more than RM1 million.

Perhaps the Hong Kong tycoons are hoping to stay closer to their money across the causeway.

Whether It’s Residential, Commercial Or Industrial, Co-Create Tomorrow & Beyond With EcoWorld