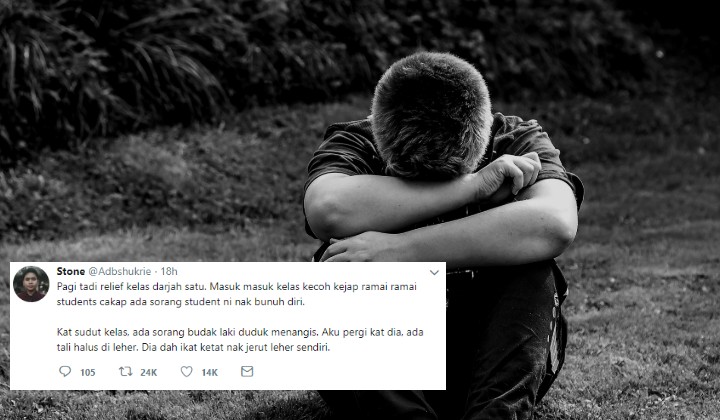 A seven-year-old boy tried to kill himself in his classroom at school because he couldnâ€™t bear to suffer the loss of his parents.

Twitter user @Adbshukrie shared his experience of talking down the standard one student who was on the verge of committing suicide in a class that he was substituting.

According to @Adbshukrie he was shocked to have found the boy sitting alone and crying at a corner of the classroom with a string tied tightly around his neck after being alerted by other students.

After consoling the student and managing to get the string off his neck, the teacher then proceeded to questioned the child on his actions.

@Adbshukrie was heartbroken when it was made clear that the boyâ€™s parents had passed, and the reason why the he tried to take his life, was in order to see them again.

“He said ‘I miss my mother and father.’ I was shocked, why would you want to kill yourself to see your parents. Then a student came and said ‘his parents had died, he wants his parents’ The boy stopped crying just glared at the floor.” I felt like crying on the spot.”

The teacher continued to calm the child down, reminding the boy to be thankful for what he had and that there was more to look forward to in life.

I hold my tears, hugged him and bring him to the teacher’s table. Aku taknak nanti dia nangis lagi. Keep it calm and cool.

The boy was apparently staying with his aunt at the time.

@Adbshukrie also had a reminder to everyone to always approach cases such as these with an open mind and a tender heart.

Never approach suicidal people with anger or intimidation. I know how the kid feels like that’s why I approached him slowly, talked to him and try to understand him. Kalau marah marah sebab dia suicidal, dia akan stay depressed and hate to live.

The thread of Tweets currently has over 13,000 likes and 23,000 retweets as netizens are both stunned and saddened by the reality of what had transpired.

this is so heartbreaking 💔😢

Please please give him a lil bit attention and love. Baru darjah satuuuu 😭😭😭

I hope nothing bad happen to him after this. Please as his teacher, look after him closely..Idk tht boy but surely i know youâ€™re there, at the school, to help him…tgok2 kan dia sbb suicidal thought at the age of 7 is a SERIOUS thing😢😢😔

Others also commended the teacher on his noble actions to comfort the child.

and thank you for being a supportive teacher. keep on inspiring!

Thank you for being a great teacher and a better human being. May Allah ease that childs life inshaaAllah.

May God give him strength. 😭 thank you for saving a life today and may God bless you too and Iâ€™m sure that he will remember the good deed that you did. Well done 🌸

According to the 2017 National Health and Morbidity Survey, 29% of Malaysianâ€™s suffer from depression and anxiety related disorders and this has became more prevalent over the coming years.

The study also found that many Malaysians aged between 13 to 17 are critically suffering from mental health problems, with 10% of them having suicidal tendencies.

However, good news is, the government is currently looking into reforms to decriminalize attempted suicides as a move to further shed light on the mental health discussion in Malaysian society.

If you or anyone you know may be suffering episodes of depressions or having suicidal thoughts, please reach out.