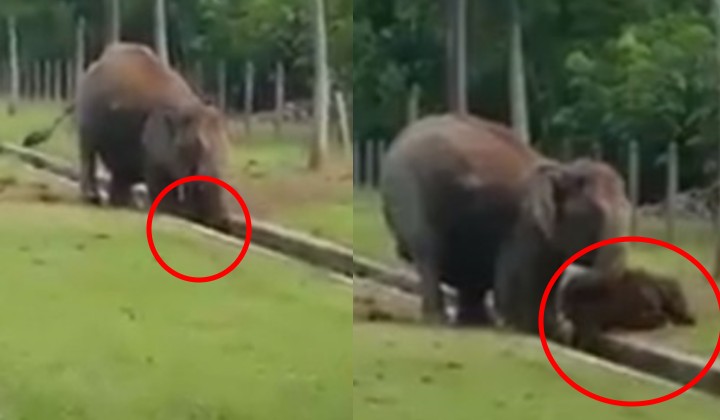 A baby elephant believed to be just a day old was caught in a storm drain near the Kota Tinggi Rubber Research Station in Johor, last Friday.

The calf and its mother was making their way towards a forested area across the road when it fell in the drain and got stuck for about six hours.

Footage of the incident also made its way to Facebook. The 2-minute clip shows the mother elephant making several attempts to release the tiny calf, with a crowd of human spectators cheering them on.

“Sikit lagi sikit lagi,” which translates to, “just a little more”, can be heard from the crowd as the mother helps her baby along.

Johor Wildlife and National Parks director Salman Saaban said a team from the department was dispatched after reports came in at 4.15am.

According to Salman, the mama elephant finally managed to get her baby out at around 10am and made a fast retreat into the jungle.

Luckily for baby Tantor, he only received some minor bruises to remind him to be a little more weary of drains in the future. As they say, an elephant never forgets!

Although encounters like these are heartwarming to see. It does bring some question…

Elephants are a wide-ranging species that needs large areas of natural habitat to live and breed.

A crucial factor for their survival is, the availability of large enough areas for them to live. But due to human encroachment, they are forced more and more into small corners of the jungle.

Just recently we were struck with the tragedy of three female elephants being poisoned to death near a palm oil plantation in Kluang, Johor.

And with more and more forest areas in Malaysia dwindling – with over 4.9 million hectare of forest cover gone between 1983 to 2003 alone – it is still unclear if we can manage to find a solution to prevent an escalation in human and animal conflicts in the future.

Right now at least one-fifth of mammals found in Malaysia is facing extinction, with elephants being at serious risk!

Letâ€™s all hope to someday coexist with all our wild brethren including these gentle giants, before it’s too late…