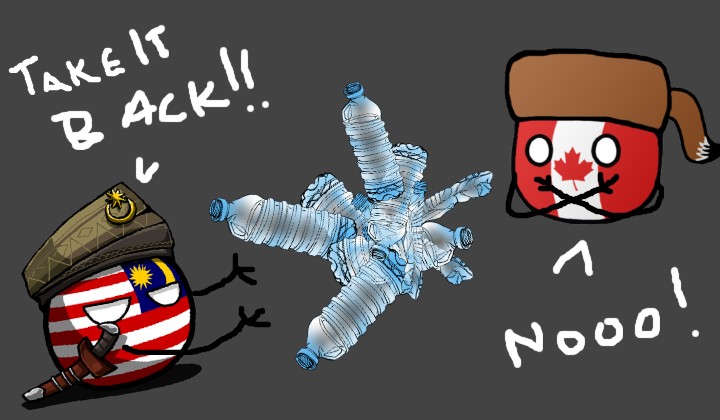 Last week, Canada (allegedly the ‘nicest’ country in the world…) announced plans to ban some single-use plastics as a step to address the global problem of plastic pollution and climate change.

They even passed the Free Willy legislation, banning the capture and breeding of ocean mammals like whales and dolphins.

But today, the Canucks are saying they wonâ€™t be taking back their garbage from here in Malaysiaâ€¦(that’s not nice, ay?)

Recently it was revealed to the world that western nations have been dumping millions of tons of waste in Southeast Asian countries.

Malaysia and Philippines pushed back and announced they are returning huge shipments of illegal plastic waste back to the origin countries, with Canada caving to Filipinos’ demands in order to avoid tensions.

However, Reuters today reports that the Canadian government received no information of waste shipments from Canada to Malaysia, and so had no plans on picking up the plastic waste which Malaysia is prepared to return.

The report also mentioned that right now there is no way to determine how much of the waste left sitting here came from the Great White North so the Mounties are currently reaching out to our government for answers.

“There are no plans for the Canadian Government to pick up waste in Malaysia.”

The plastic problem has become a global dilemma as most of the plastics made, some 6.3 billion metric tons of it, ends up as waste material. Pilling up in landfills, burned, and eventually ends up in our oceans.

With the planet heading towards a climate crisis, most are left to wonder; Is it too late for us to take action and what sort of action should we make to fix it?

Catch this quick video on how plastics are affecting you and how we might together come to a conclusion to solve this problem.