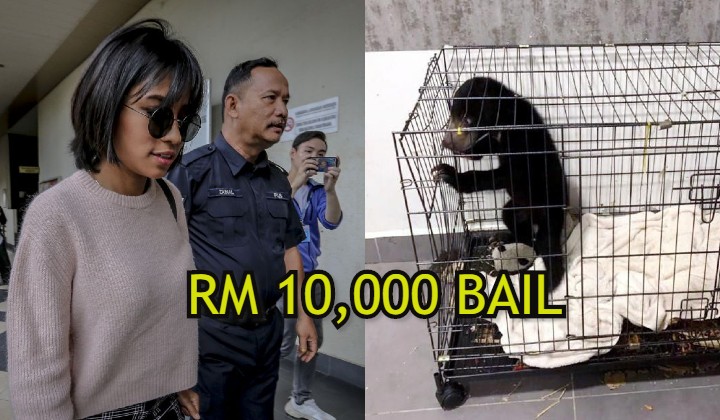 Last week, Malaysians were appalled by a video of a sun bear
pitifully roaring for food from the 16th floor window of a condominium
in Kuala Lumpur.

It soon emerged that a 27-year old singer â€œrescuedâ€ the sun bear because she â€œthought it was a dogâ€.

Well, looks like she needs some rescuing of her own as she faced the KL Court today on two charges and a very costly bail set at RM10,000.

Zarith Sofia Yasin pleaded not guilty to the charges below:

1. Section 69 (1) of the Wildlife Protection Act 2010 for
keeping a protected species without a special permit.

2. Section 86 (1C) under the same Act for keeping the animal
in an environment that was not conducive to its health and comfort.

If found guilty, sheâ€™s looking at a pretty heavy punishment as Section 69(1) of the Act provides for up to 10 years imprisonment or a maximum fine of RM200,000, or both.

The public prosecutor, Munira Zainal Abidin, had actually
requested that the bail be set at RM30,000 as it was a serious offence and also
to prevent Zarith Sofia from disturbing other witnesses.

He also told the magistrate that she supports both her
parents with a lowly monthly income of RM3,500.

Judge Manira Mohd Nor agreed and ordered a lower RM10,000 bail BUT  Zarith Sofia has to report to the police station once a month.

Her case will be up for mention on July 19.

If you spot a wild animal in need of help…

Or even the Malaysian Fire & Rescue Department/ Police at 999.