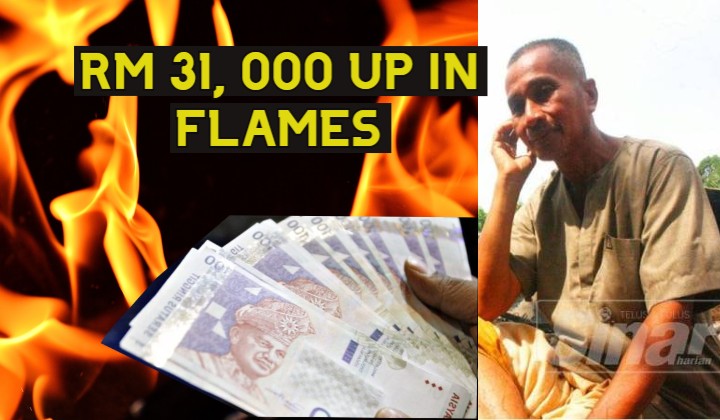 Sometimes, the Hari Raya preparations does not spark joy as a Kelantanese man discovered when he lost RM31,000 cash in a house fire.

The money was the earnings of 60-year-old Abdul Rahman Jusohâ€™s meat and cattle sales before the Hari Raya Aidilfitri celebrations.

Sinar Harian reported that Abdul Rahman, who lives in his sisterâ€™s home in Kampung Banggol, Gelang Mas, usually goes to the bank immediately after making a sale to safely deposit the money.

However, he unluckily did not manage to do it this one last
time due to the Raya holidays and jammed roads.

Thankfully, no one was at home during the blaze that reduced
the house to ashes yesterday evening.

Whatâ€™s even more touching is Abdul Rahmanâ€™s response to the incident. He told Kosmo! Online despite losing such a large amount of money, heâ€™s grateful that his family was safe and sound.

He also accepts the incident with an open heart and considers
it as one of lifeâ€™s many tests.

While we applaud his ability to not blow up in misery, Abdul
Rahman and his family have lost everything in the fire and are now homeless.