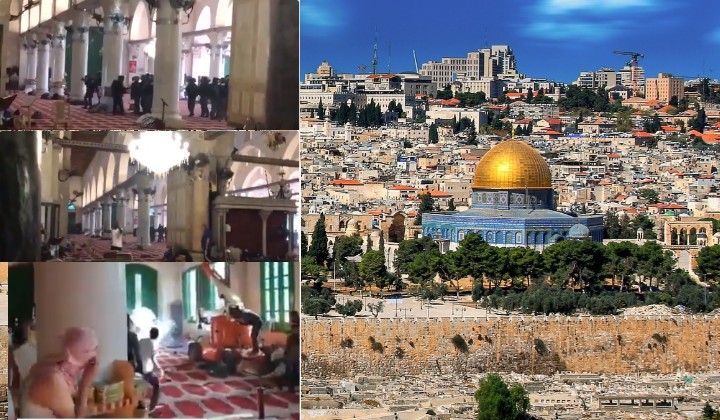 Violence spewed between Palestinian Muslims and Israeli security forces when protests erupted at the Al-Aqsa Mosque compound as reported by Al Jazeera.

The incident, which happened on Sunday, resulted in 45 reported injuries and 7 arrests being made as the final days of Ramadan approaches the Old City, the Daily Mail reports.

The situations apparently turned violent after Israeli police allowed a group of Jewish settlers to enter the mosque compound.

Customarily, Israelis are denied entry into the holy site
during the last 10 days of the fasting month.

The report details that Jewish settlers were seen amassing outside of the mosque compound, before later being allowed in.

Riots followed shortly after as Muslim worshipers inside the mosque revolted in protest, throwing chairs, rocks and other items towards the on-coming Israelis.

This prompted security forces to use tear gas and rubber ammunition in order to control the situation.

June 1 marks the annual celebration of Jerusalem Day â€“ a day celebrated by Israelis commemorating the occupation of Palestine and the end of the Six-Day War conflict in 1967 – which Israelis generally celebrate by congregating in and around the historical city.

This marks the first time in 30 years where Jews were allowed into the site during the time period.

Palestinians had on Friday (May 31) celebrated Lailat ul-Qadr or the Night of Power, which is celebrated by Muslims around the world, marking the day that the Quran was bestowed upon the Prophet Muhammad (S.A.W) by Allah (S.W.T).