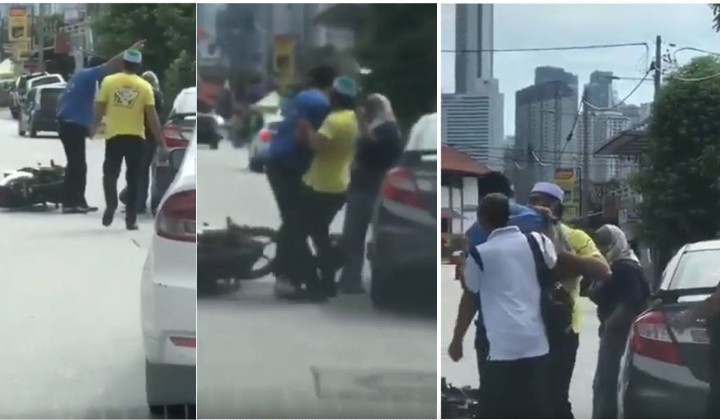 Yesterday, a commotion broke out on Jalan Dato Keramat, Kuala Lumpur, after a motorcyclist assaulted a woman driving a Honda Civic.

A 34-second video clip of the incident captured the moment as the motorcyclist drops his Honda Dash before slapping and punching the lady driver as others try to intervene.

According to Chief Police of Wangsa Maju area, Superintendan Noor Azmi Yusoff, the suspect had initially banged his helmet on the car, which led to the lady getting out of her car to check the damage.

After the altercation, the lady driver was brought to Hospital Ampang and later made a police report.

Currently, the police are on a manhunt for the motorcyclist.

He reportedly has 5 incidents of previous criminal records including drug offences.

Netizens are also upset with the motorcyclist’s actions.

Anyone with information of the incident can proceed to contact Investigating Officer R Sivanathan at 016-5903985, or call Kuala Lumpur Police Hotline 03-21159999, or directly proceed to any police station nearby, as investigations are currently conducted under the Penal Code Section 323 and Section 427.