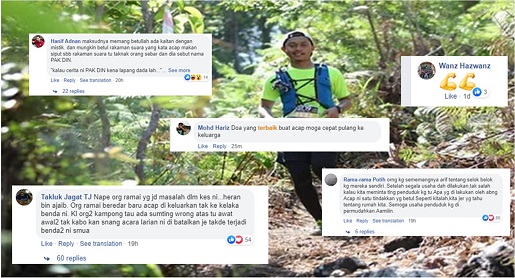 After 25 days of search and rescue (SAR) efforts for 29 year-old Mohammad Ashraf “Acap” Hassan, the SAR team is suspending their efforts but some are putting their faith in the local people.

Acap is a Johorian boy who participated the Gopeng Ultra Trail (GUT) 2019 on March 23rd in Perak and has been missing for 27 days now.

On April 17th, Acap’s elder brother Mohd Zahiruddin, who goes by Denny Lang on Facebook, had posted a request for all SAR teams to stand down and let the locals get Acap out of the jungle.

It has also been reported that Perak police chief Datuk Razarudin Husain is temporarily halting the search due to a lack of leads.

It should also allow the family to regain their composure, put an end to fake claims, and minimise the movements of outsiders which had affected the local community

But this development has caused an uproar of mixed reactions from netizens.

Some are placing their trust in the local people, believing that the indigenous orang asli are genuinely better at navigating the jungle.

Some are wondering if the call was made to execute a trade, insinuating that the locals themselves might have something to do with Acap’s disappearance.

There are even those claiming he may have been abducted by jungle spirits, making light of the boy’s disappearance, and using it as chance to joke around.

Others believe that getting lost in the jungle is easy enough without the interference of spirits.

Regardless, we still hope that he’s found soon and returned safely to his loved ones.