Suzaini was on his way home when he witnessed the car in front of his plunge into Tasik Merdeka. 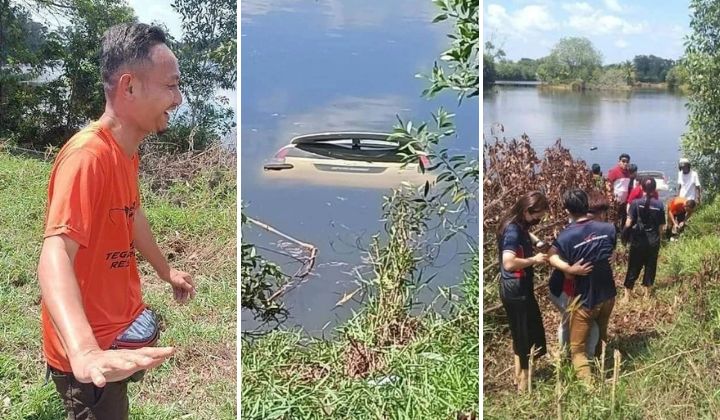 Two women and a man travelling in a Perodua Myvi were lucky to be saved by a good Samaritan when the car they were travelling in fell into a lake, which is a former bauxite mine.

Suzaini Mohd Sadali, 43, a factory supervisor, was on his way home in Parit Bayu Emas from a hospital with his son when they saw a car in front of them skid and plunge into Tasik Merdeka, Johor.

He stopped his car and saw two women, one next to the driver’s seat and another in the rear seat clinging onto the body of the car while crying, New Straits Times reported.

The man in the driver’s seat was frantic and screamed for help when he spotted Suzaini.

Suzaini quickly jumped into the water and managed to get the male driver to the edge of the lake before two other men helped save the two women.

He said he was grateful that he was able to save the victims from drowning in the deep lake.

Batu Pahat police chief ACP Ismail Dollah in a statement said they received information about the incident from the public at 1.30pm.

The three victims, aged between 25 and 28, were reportedly travelling from Tongkang Pechah to Batu Pahat when the driver lost control of the car, causing it to skid to the right side of the road and subsequently plunge into the lake.

Fortunately, all of them did not suffer any injuries. The case is being investigated under Rule 10 LN 166/59 for failing to control the vehicle while driving.

Netizens praised Suzaini for his brave and selfless act. They also wished Suzaini and his family well.

Some of them, believed to be Suzaini’s family and friends, also expressed their pride in knowing a hero.