Parents and students plead for the Melaka coach to be given a chance after he was suspended temporarily because of the slapping incident. 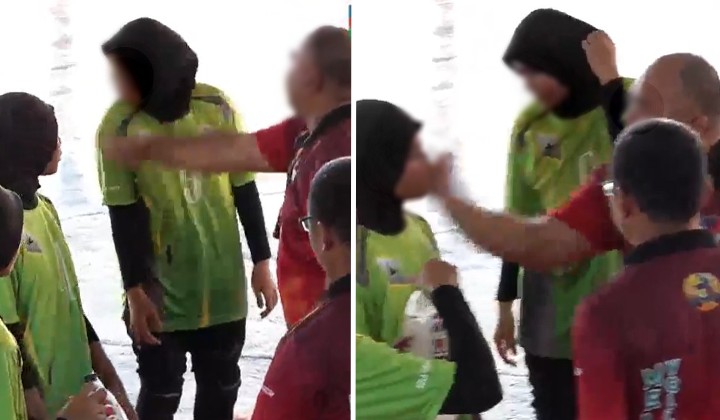 In a recent viral video just this new year, Malaysians were shocked to see a male coach slapping teenage female athletes in public.

The incident was recorded live on the Facebook account of the Malaysia Volleyball Association on 16 December 2022 but went viral on social media on 1 January 2023.

The incident happened during a volleyball match in the 20th Malaysia Youth U14 Volleyball Championship 2022 (Girl’s Category below 14) between Johor and Melaka.

According to Sinar Harian, the match was to secure third place in the championship and was held at SJK (C) Pei Hwa in Johor.

In the video, the coach for the Melaka team was seen slapping two female athletes in the face right after the break after they had lost points for the team. The said athletes did not react to the slap and later resumed playing the game like normal.

The Sports & Education Minister picks it up

Youth & Sports Minister, Hannah Yeoh picked up the news and condemned the actions of the coach.

She also said that slapping anyone, boys, girls, athletes, spouses or maids is in fact wrong. Malaysians should stop normalizing physical abuse such as these as means of behavioural compliance.

She further said that they will conduct an independent investigation to determine whether this kind of violent training has been practised in the volleyball team for a long time.

Together with the Minister of Education, Fadhlina Sidek, they probed further into the case.

Earlier today, Fadhlina gave a statement to the press saying that the Education Ministry will not compromise on violence that involves students.

The ministry has met with the parents of the athletes and according to reports, they are still investigating the case and haven’t concluded the incident yet. There are many stakeholders in the case, not just the parents, and they will look at the case as a whole, especially on matters related to integrity and discipline.

The ministry, through the Melaka Education Department, had also conducted counselling sessions for the two girls.

Even got the attention of international eyes

The video didn’t just go viral in Malaysia, apparently, it also caught the attention of an international football coach and youth mentor, Mehran Rowshan who’s based in Dubai.

Two days ago, he did a reaction to the video that has been circulating online about the local coach slapping his underage athletes.

@mehranrowshan If this happens around you 😡, don’t stay quite! A fossil slapping his players! #bullying #dinosaurcoach #safeguardingchildren ♬ Sweet Dreams – Ravens Rock

The coach was suspended temporarily, further action will be known on Wednesday

On 1 January, the Malaysia Volleyball Association (Mava) issued a media statement, suspending the coach from further involvement in the National Volleyball activities until the investigations are finalized.

According to reports, the coach in question has already apologised directly to the two athletes the same day and the issue was resolved. He even approached the parents and apologised for his behaviour.

State Youth Development, Sports and Non-Governmental Organisations (NGO) committee chairman V.P Shanmugam yesterday said that the matter has been resolved and does not need to be protracted.

According to him, the coach was specially appointed by the Melaka Volleyball Association for this specific tournament. He has been coaching both teenagers since they were in primary school and the incident on December 16 was the first.

“Perhaps he was disappointed with the drop in the performance of his players that made him act in such a way. However, it should not have happened,” he said.

The decision to permanently suspend the coach will be known on Wednesday, he further stated.

The team pleads to stop attacking the coach

In a separate reaction, a Twitter user going by the name ‘Melaka volleyball club’ reacted to the news of their coach being suspended.

They pleaded to the public to stop attacking their coach and let them handle the issue internally. They admitted that his reaction was wrong but they believed it was his way of educating them. They forgave his action and stood firmly behind their coach.

“He is not fat or bald that you can just insult,” the Twitter account posted in defending their coach.

Also, earlier today, according to Sinar Harian, one of the parents of the slapped individual released a statement that he wants the coach to still be a volleyball coach.

Abd Halim Bakar, 50, said that it was indeed an unfortunate event that shouldn’t have happened but the slap did not cause any physical injuries to his 14-year-old daughter.

In fact, his daughter is even worried about the status of his coach as he has given a lot to ensure their volleyball team succeeds.

“From having zero knowledge of volleyball to representing Melaka in a national tournament, he has given so much to polish their skills to become good athletes,” said the parent to a reporter in his house in Kampung Melekek today.