Malaysian netizens have been sharing a picture of the knife taped to a children’s playground railing all over social media, causing paranoia. 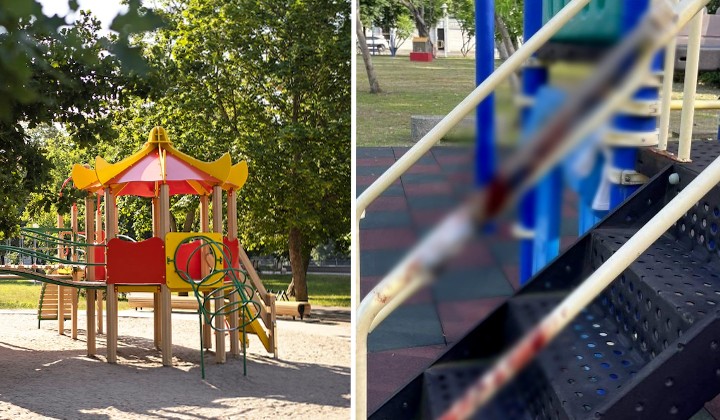 Recently, a picture of a long machete-like blade taped to a bloodied railing at a playground has spread across Malaysian social media.

The post in question already has around 7.1K comments and 7.6K shares on Facebook and has led many to believe this happened in Malaysia, causing paranoia among parents here.

However, after thorough fact-checking, it appears to be an isolated case in Taiwan that happened in June last year.

It happened in Taiwan

According to a local Taiwan news agency, PTS, on 31 May 2022, a five-year-old child was found minimally injured after slightly cutting his index finger on a railing in a children’s playground in Dingmei Park in Annan District, Taiwan around dusk.

His parents later found out that there was a machete-like knife strapped to the railing of the stairs where their son had been playing at. They identified the knife to be a watermelon knife and it was smeared with what appeared to be red paint. They quickly informed the authorities about the incident.

Police came to the scene and collected evidence from blood found on the railing and playground mat. Later on, they also checked over 100 CCTV footage and found the culprit.

The culprit was a 75-year-old man who was later found deceased. On the day of the incident, a witness saw him around 11.50 am, with bloodstains on his head. Before identifying him as the culprit, the police had already spoken to him in the park. They found out that he couldn’t talk and was injured at the time.

Later on, after studying the surveillance footage and confirming that it was him, the police came for him again and found out that he had already died. The police found footage of him carrying the watermelon knife from his house into a box on his scooter and riding the scooter to the park, which was around 100 meters away from his house.

After questioning his family members, his granddaughter told them that her grandfather was experiencing a loss of appetite and told her that he might die over the next several days.

The 75-year-old man had no criminal record and his motive may never be known. The Tainan police believed that this was an isolated incident but they stepped up patrols afterwards.

Although it is a case to be wary of, parents and netizens should check the news first before spreading it to avoid misinformation and general paranoia.