The idea to transform his wooden kampung house into a floating home came after his floating chicken coop invention managed to save the animals in a past flooding incident. 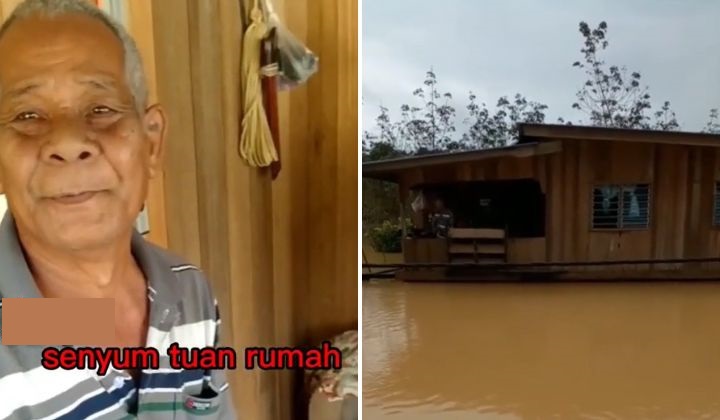 During the floods in Terengganu, one man is fortunate enough that his home is still safe and relatively untouched.

It was all thanks to his creative problem-solving long before the current flood hit his housing area in Kampung Tebak, Air Putih, Kemaman.

Former lorry driver, A. Bakar Che Ahmad, 67, had the idea to transform his wooden home into a floating home after seeing his floating chicken coop invention in 2018 successfully keep the animals safe in a flood.

He decided to undertake the massive task because his wife’s poor health makes it difficult for them to evacuate to a flood relief centre.

Having a floating home would keep his wife comfortable and his home safe during a flood and all seven of his children agreed to the plan.

The father of seven told Utusan he did the necessary renovations to the 5 bedroom and 1 bathroom house using the funds from his children (about RM47,000) in February 2022.

To make the house float, he only used 69 plastic drum containers to serve as flotation devices and wooden materials.

I’ve studied each and every aspect. I didn’t build fixed stairs because it’ll be difficult for the house to float if anything gets caught in it. Under the house, I also made sure the plastic drums are spread apart to allow water to flow through.

He also tied both sides of the floating home to two 6-metre-long poles so the property wouldn’t be washed away by the flood waters.

God-willing, this house can float up to 5 metres. I dared to take the risk to build this home because the flood tide in this housing area is not that fast because we’re not too near the river.

His foresight paid off and the sight of his floating home surviving the flood went viral on Tiktok.

Netizens were in awe of his invention and praised the man for his clever idea.

It turned out that he was teased for wanting to build a floating home prior to this. The naysayers said that he ran the risk of his home floating away when the flood comes.

Fortunately, he proved them wrong and his ingenious plan worked when Terengganu was hit by a major flood this month.

READ MORE: Terengganu Flood Traps Grandparents At Home With Only A Lit Candle