Some say Malaysians may argue on a lot of things, but there are four that keep us united: football, badminton, Datuk Seri Siti Nurhaliza and nasi lemak. 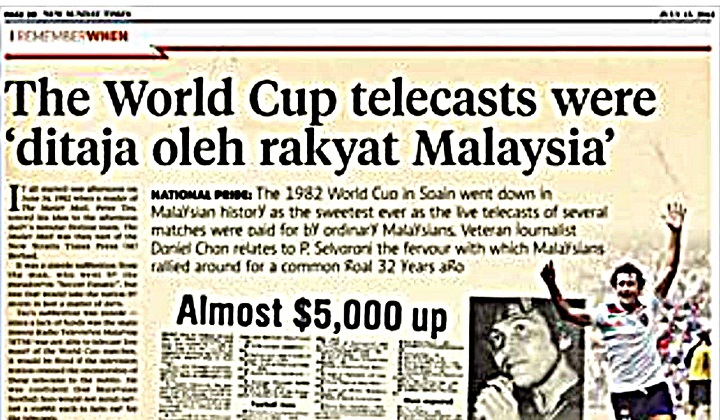 With the Internet, stories often get told over and over again. It becomes a retelling of a retelling, of sorts. However, some stories are worth revisiting.

Like the beloved tale of Malaysians coming together for the World Cup. We have never made it to the prestigious game but we are as hardcore when it comes to lending our support as countries that qualify.

Some say we may argue on a lot of things, but there are four that keep us united: football, badminton, Datuk Seri Siti Nurhaliza and nasi lemak.

In 1982, insurance agent Peter Teo called The Malay Mail to suggest a crowdfunding effort so that the only television network at the time, RTM, could air more World Cup matches than the few they could afford.

Mustapha Kamaruddin who was with The Star at the time, said this led to massive interest, not only in Malaysia but worldwide.

“The fans wanted to see players in action live rather than watching highlights on news or listening to it via radio stations.

“The suspense of a live telecast is something else,” Mustapha, also known as El Loco, said.

Having had the pleasure of knowing the man, he is not literally ‘loco’, just probably crazy passionate about sports, and football, specifically.

Going back to Teo’s suggestion, he proposed Malaysians donated RM1 each and The Malay Mail, at the time part of the New Straits Times Press (NSTP) turned the idea into reality, leading to the birth of the People’s Live Telecast Fund (PLTF).

Frankie D’Cruz, a true blue newsman who has been in the industry for decades, was a reporter at The Malay Mail at the time.

He told The Rakyat Post that it was truly a proud moment when the phrase ‘DiTaja Oleh Rakyat Malaysia’ (Sponsored by the Malaysian People) flashed on the television screens before each match.

“It showcased what the Malaysian spirit could accomplish. It was a proud moment in that people came together to see the gigantic effort through.

“As for Malay Mail staff, it gave us goosebumps. Being involved in such a novel people’s initiative left an indelible mark on our lives.

“Together, we strove tirelessly to make it work. And work it did, for it remains the only World Cup that was DiTaja Oleh Rakyat Malaysia,” D’Cruz said.

The PLTF reflected a true Malaysian spirit, which not only saw normal citizens donating but also public figures. There was also a football match organised between The Malay Mail and Malaysian artistes.

What stood out however was not the big names, but a child. D’Cruz said a six-year-old emptied his piggy bank to donate savings of RM12.80 to the PLTF.

D’Cruz himself was part of the team where the wager was RM80 for each goal.

Recalling the match, D’Cruz said he ‘fired blanks’ and in one instance ‘drew boos when he ballooned the ball as Hamid rushed out and performed a comedic jig and weird facial gestures’.

Indeed, there have been various accounts of the PLTF on the Internet, but not many that survive to this day are told in the words of someone who was there, in the middle of it all.

According to D’Cruz, RTM had been airing live football matches since 1974 but only the opening game, the semifinals and the final match.

Fast forward to 1982, Teo, who referred to himself as ‘Soccer Fanatic’ called The Malay Mail’s Hotline a day after the June 13 curtain raiser match which saw reigning champion Argentina being defeated by Belgium 0-1.

“The Hotline report was titled ‘ How About This?’ which triggered a revolution and what is now known as crowdfunding.

“Three days after Teo called, Adib gave the go-ahead for the fundraiser.

“The Malay Mail splashed his reaction on the cover the following day, and the nation was taken by storm. The PLTF was launched on June 19 to a terrific response.

“The Malay Mail office in Balai Berita, Bangsar, and New Straits Times branches nationwide were swarmed by people from early morning to late night in the days that followed.

“The threshold was RM60,000 for one match and unsurprisingly, Teo was the first to donate RM10 among thousands that also included children. Some contributions came via cheques, postal and money order.

“The paper published reports and names of donors daily to update the public. Within five days of launch, the PLTF pool swelled to RM66,116.45. That was enough for a match but Malay Mail ‘challenged’ its readers to take it up one notch,” D’Cruz said.

The response was overwhelming with a total RM170,000 collected by the time the football match between The Malay Mail team and Malaysian artistes took place.

The PLTF eventually collected RM300,000, which was enough for a fourth match between England and Spain and a post-tournament telecast – the Fifa World All-Star charity game on August 7.

As a sports journalist back then, Mustapha said the airing of more live matches came in handy especially if he had to write on the Malaysians’ perspective of the number one sporting event of the world.

“One can’t be writing with depth if they don’t watch live matches… that is my opinion. This also goes for other sports, as well. It is not that easy to be a sports journalists, overall. Having to watch athletes even in training besides matches, for example.

“Unless, of course, one just reports only the scoreline or whatever a coach has to say. That would be a piece of cake.

“This aside, just like the people, I enjoyed the action which saw Italy emerge as champions in the end by beating West Germany 3 – 1 in the 1982 edition,” Mustapha said.

Mustapha would later join The Malay Mail in 1987.

On Teo’s idea which snowballed into an amazing display of Malaysiana, Mustapha said, “A medal for insurance agent Teo for coming up with that brilliant idea. Silver works too, if not gold. Nowadays, he must be enjoying his live telecasts via cable TV, whatever sport it may be.”