The 20-car train carrying rubber sheets from Hatyai to Padang Besar, Perlis, derailed after a homemade bomb that was planted on the tracks exploded. 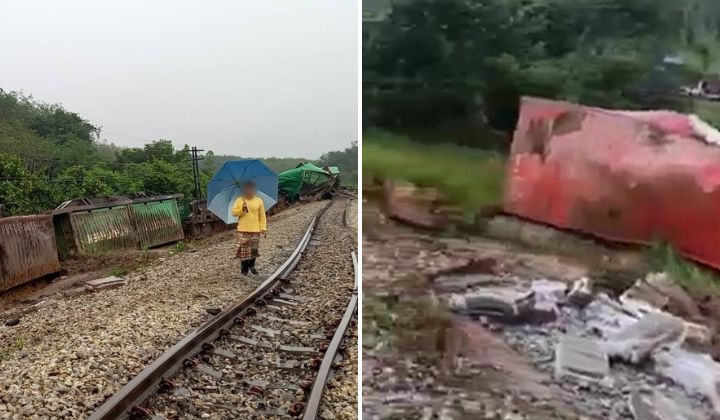 A Thai freight train en route to Malaysia was derailed on Saturday after a bomb planted on the rail tracks in Sadao, Songkhla, went off.

The train was transporting rubber from Hatyai to Padang Besar in Perlis, Free Malaysia Today reported.

According to Thai PBS, the 20-car train was arriving in Village 2 in Khlong Ngae sub-district when it derailed around 12.50pm (local time).

The State Railway of Thailand said the two drivers, a technician and a staffer on board escaped uninjured.

Perlis executive council member Izizam Ibrahim, who’s in charge of border relations and cooperation, said no Malaysians were affected in the railway blast.

However, 11 of the 15 container wagons were damaged and came off the rails in the blast.

The explosion which derailed the train left a big hole in the track. The Hatyai-Padang Besar route has been closed for several days for repairs.

The local authorities are now investigating whether the explosion was an accident, and it was alleged that southern insurgents carried out the attack.