Monday is a public holiday for Malaysia. 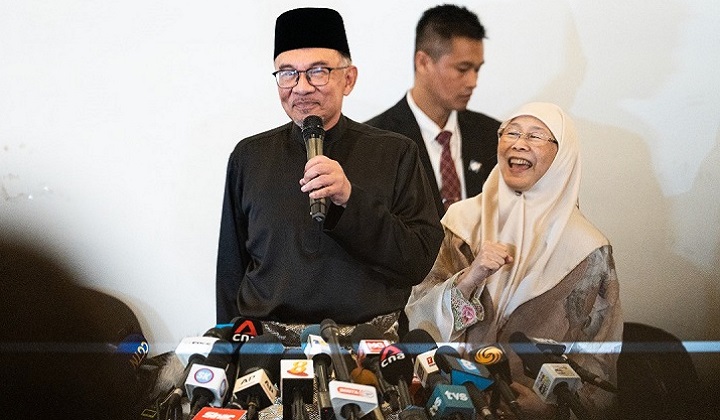 Datuk Seri Anwar Ibrahim who was officially sworn in as the 10th prime minister of Malaysia today confirmed that the unity government is made up of Pakatan Harapan (PH), Barisan Nasional (BN) and Gabungan Parti Sarawak (GPS).

He however would not be opposed to any other parties wanting to join the pact.

He said PH and the unity government will uphold the Constitution, stressing that they will uphold Malay as the national language and Islam as the Federal religion, apart from upholding Bumiputera rights and the sovereignty of rulers.

The Tambun MP stressed that they will uphold the rights of citizens regardless of race, religion and region.

Anwar said this in a press conference tonight at the Sungai Long Golf Club.

In an announcement many Malaysians have been waiting for, Anwar announced that Monday 28 November is a public holiday.

On GPS, Anwar confirmed they are with his unity government.

Initially, GPS had said they would support a unity government with Perikatan Nasional (PN), BN and Gabungan Rakyat Sabah (GRS). However after much backlash, GPS chief Tan Sri Abang Johari Openg said they would leave the matter to the wisdom of the Yang di-Pertuan Agong.

“I’m willing to accept all others who want to work with us,” Anwar said.

Touching on the unity government he will be leading, Anwar said he will not compromise with corruption.

“Under my rule, I will not compromise with corruption. This is our condition in unity government,” he said.

On the challenge of his support posed by PN chief Tan Sri Muhyiddin Yassin, Anwar informed that the 15th Parliament will convene on 19 December and the first motion will be a vote of confidence.

Earlier, Anwar who arrived about an hour late for the press conference took a call from his Turkish counterpart Recep Tayyip Erdogan upon arrival.

He paid tribute to her and coalition partners, saying they persevered with him over the decades.

At the same time, he said his government would clear the emoluments before tabling a new and revised budget.

He also pledged to decline his prime minister’s salary as part of his election promise.

Anwar, who vowed to tackle endemic corruption, said he would go to the Prime Minister’s office in Putrajaya before 10am tomorrow.

He added that his focus is also on reviving the economy.

Anwar said he was glad that the share market was bullish today and the ringgit had also strengthened.