It really is not that difficult to set up a WhatsApp or Telegram group chat. 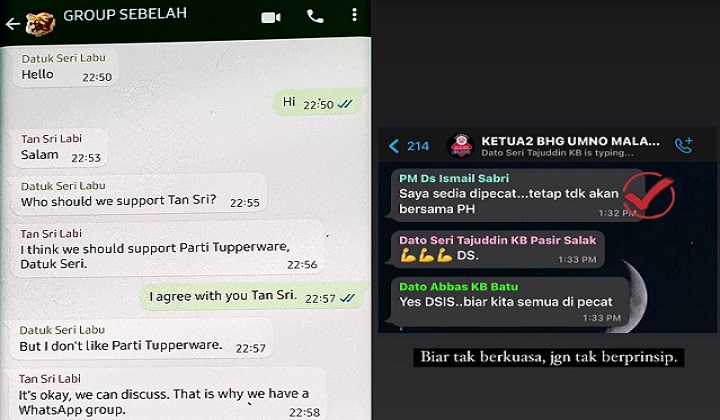 The final tally of the 221 parliamentary seats (minus Padang Serai) following the conclusion of the 15th General Election (GE15) saw no one coalition being able to form a government.

Barisan Nasional (BN) has 30 seats and the announcements of which of the coalitions they plan to join have left Malaysians frustrated.

At first, Gabungan Parti Sarawak (GPS) said they would join hands with Perikatan Nasional (PN), BN and Gabungan Rakyat Sabah (GRS) to form a government. PN chairman Tan Sri Muhyiddin Yassin confirmed having discussed with GPS and GRS but did not mention BN, instead only saying he also had the support of ‘several other Dewan Rakyat members’.

To this, BN chairman Datuk Seri Ahmad Zahid Hamidi said there had been no discussions that translated into BN having agreed to this collaboration. He also said all BN MPs who won in GE15 had signed a declaration (akujanji) giving him the mandate to determine any political collaboration in forming the government.

On the other side of the fence, Pakatan Harapan (PH) said they have the numbers to form a government but chairman Datuk Seri Anwar Ibrahim did not say who they would be cooperating with to hit a minimum of 112 seats.

This morning, BN and PH leaders were spotted at the Seri Pacific Hotel in Kuala Lumpur, supposedly for a discussion on forming a government together.

The purported ‘Pacific Plan’ did not sit well with several BN leaders who insisted they would not work with PH. Umno vice president Datuk Seri Hishammuddin Hussein said he stood by this decision and was willing to be sacked for it.

Ahmad Zahid, in a press conference said the 30 BN MPs were bound to the decision made by the BN leadership in such matters.

A group chat screenshot later went viral in which it was alleged that Umno vice president and caretaker Prime Minister Datuk Seri Ismail Sabri Yaakob had said he too did not want to work with Ph and was willing to be sacked.

There was no confirmation on the validity of the screenshot until Ismail Sabri’s daughter Nina Sabrina posted it on her own Instagram Stories, putting a red tick next to what her father allegedly wrote. She captioned the post: ‘Biar tak berkuasa. Jangan tak berprinsip.’ (Better to be powerless than to be without principles.)

Adding even more confusion to an already confusing situation is Umno deputy president Datuk Seri Mohamad Hasan who took to Facebook to suggest that PH and PN form a government and BN would be the opposition.

He said BN accepted that it had been rejected by the people and because of that, the party has no power to form a government.

“I suggest PH and PN collaborate to form a government because they have amassed a higher amount of votes. BN is prepared to be the opposition who is responsible in being the check and balance for the new government,” he said.

MCA president Datuk Seri Wee Ka Siong also shared on Facebook that he did not attend any meeting with PH leaders present at Seri Pacific. He said he only attended a meeting with the BN chairman and BN MPs.

On the state front, Wee also said there had been no discussion by the top leadership of BN on the party working with PH to form a state government. However, the collaboration did materialise as Datuk Saarani Mohamad of BN was later sworn in as Perak Menteri Besar.

With the new deadline of 2pm tomorrow given by the Yang di-Pertuan Agong for political parties to submit the numbers and their PM candidate, the question that lingers is why does it look like BN leaders do not have a WhatsApp group to hash things out but prefer posting confusing messages and announcing confusing statements to the rakyat?