Ahmad Zahid stressed that there has been no discussion with Gabungan Parti Sarawak (GPS) to greenlight a unity government with PN. 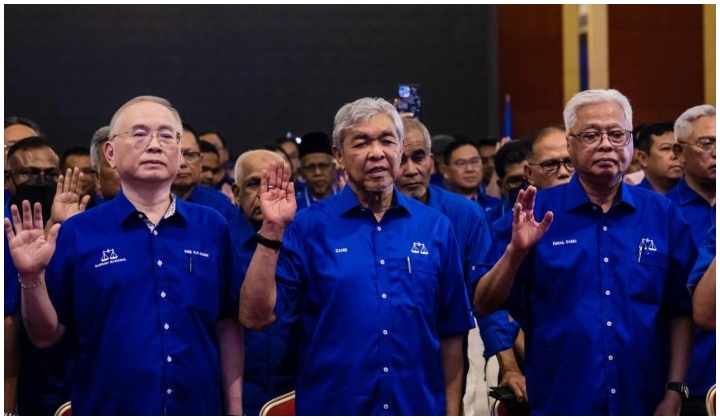 This adds a new twist to the current political scene after the 15th General Election (GE15) yesterday left no coalition with enough numbers to form a new government on their own.

In a statement tonight, Ahmad Zahid stressed that there has been no discussion with Gabungan Parti Sarawak (GPS) to greenlight a unity government with PN.

PN chairman Tan Sri Muhyiddin Yassin in a statement confirmed he met with GPS and GRS chairman Datuk Seri Hajiji Noor, in which both leaders expressed the readiness of their MPs to support him as the country’s 10th prime minister.

Muhyidin however did not mention BN specifically, only saying ‘Several other Dewan Rakyat members had also given the same commitment’.

Ahmad Zahid informed that there had been no discussion with PN up to now that could translate to an understanding of forming a unity government with the coalitiion.

He also said all BN MPs who won in GE15 had signed a declaration (akujanji) giving him, as the president (of Umno) the mandate to determine any political collaboration in forming the government.

“Any MPs who go against the party’s orders will result in them losing their party membership, including their parliamentary seat, in line with the laws prohibiting Dewan Rakyat members from switching parties as provided for under Article 49A of the Federal Constitution,” Ahmad Zahid said.